Millions turn to MGNREGA as COVID-19 lockdowns dry up employment 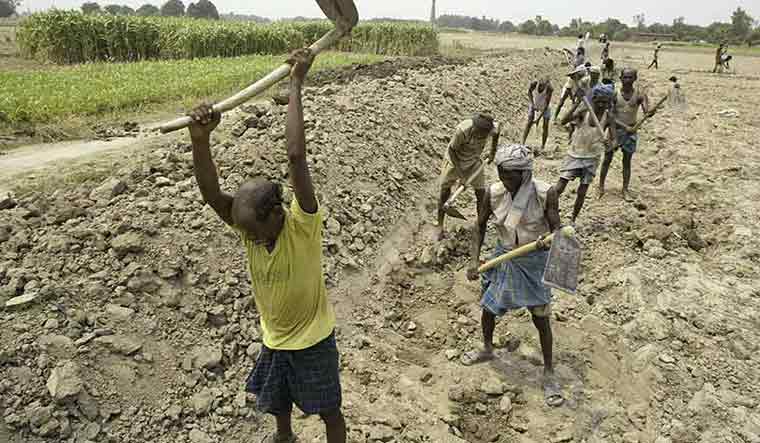 File photo of work being performed under the MGNREGA scheme | AP

When the second wave of COVID-19 pandemic hit the country, it led to another rise in unemployment as several states imposed lockdowns and restrictive measures to contain the spread of the virus.

This forced the people to look for work under the Mahatma Gandhi National Rural Employment Guarantee Act (MGNREGA) scheme. In May, this year, 1.85 crore persons were offered work under this scheme per day, a 52 per cent rise from figures recorded during the same period in May 2019. Just last year, this number was 1.22 crore persons per day.

According to the Ministry of Rural Development, as of May 13, 2.95 crore persons have been offered work in the current fiscal completing 5.98 lakh assets and generating 34.56 crore person-days. “The accomplishment has been achieved despite casualties either through death or infection among the operating staff at all levels, including those in the front line,” the ministry said.

The higher MNREGA employment also indicates reverse migration of workers from the urban centres and those areas under lockdown to their native places.

The ministry said its Revolving Fund and Community Investment Fund, amounting to approximately Rs 56 crore, had been released to women Self Help Groups in FY21 as compared to approximately Rs 32 crore in the same corresponding period in FY20. Online training has been continuing for the staff and community cadres on farm and non-farm based livelihoods and promotion of agri-nutri gardens by SHG households has also been continued in this period.

Despite lockdown across over 20 states and UTs and resultant difficulties in availability and movement of men, machine and materials, this year saw the highest length of road construction completed in the comparable period over the last three years. The cumulative physical progress and the cumulative expenditure under Pradhan Mantri Gram Sadak Yojana (PMGSY) from April 1 to May 12 period are 1795.9 km and Rs 1693.8 crore respectively in FY21, higher than the previous years in the same corresponding period.