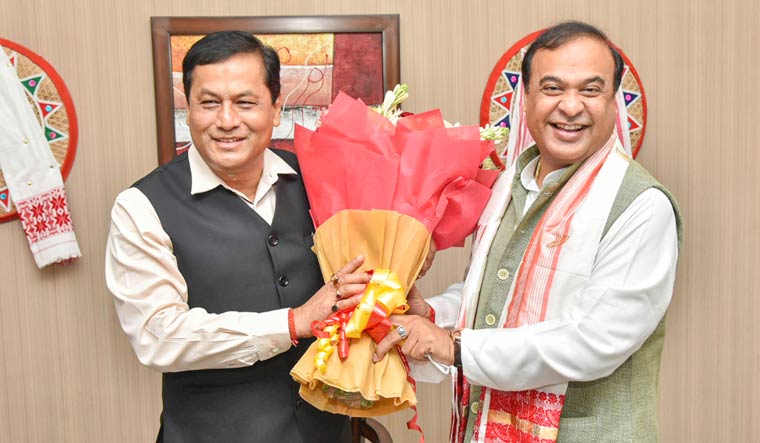 Congress may have performed poorly in the assembly elections in five states, but former Congressmen have done extremely well. In fact, three states—Assam, West Bengal and Puducherry—have former Congress members as chief ministers. The ambitious Himanta Biswa Sarma, has become the 15th chief minister of Assam, six years after he left the Congress, tired of playing second fiddle.

The ace strategist's elevation to the top post has not surprised many in the state. He was seen as a claimant after BJP did not declare incumbent Sarbananda Sonowal as the chief ministerial candidate. Sonowal, also an import from Assom Gana Parishad to BJP, had earlier served as party president twice, and Union sports minister during PM Narendra Modi's first tenure. He vacated the post for Sarma, as per instructions from the party's top leadership. This is the second instance in as many months, when the BJP has chosen a leader to lead the state. In March, the party had replaced Trivendra Singh Rawat with Tirath Singh Rawat as chief minister of Uttarakhand, a year ahead of the elections.

Sarma has a crucial role to play in enforcing BJP's ideological agenda. The BJP has promised to bring in a revised NRC, and implement Citizenship Amendment Act, a law that had led to huge protests in the state. While Sarma was instrumental in turning the anti-CAA sentiment towards party's nationalist pitch, he would have a tough job to handle the sentiments of party's main voters if the Centre goes ahead with implementing the citizenship law. Sonowal, who graciously bowed out, may be brought back to Centre when Modi expands his cabinet next.

Sarma listed three key issues he will be focusing on in the coming days: COVID-19 management, bringing revised NRC, and to end militancy in the state as he appealed to ULFA chief Paresh Barua to join talks.

Dr Akhil Ranjan Dutta, professor in department of political science, Gauhati University, who has seen Sarma from close quarters during their student days, and did their Phd together, lists three reasons for the CM's rise.

“Dr Sarma led the most aggressive Hindutva campaign by invoking the narrative of civilisational threat from East Bengal-origin Muslims. This paid political dividends for BJP and its allies in Upper Assam where the NDA alliance won over 40 out of the 47 seats. The percentage of Hindu votes jumped by over 10 per cent for BJP than 2016. Second, he was architect of many competitive populist schemes which targeted every section, which even fragmented anti-CAA forces. Thirdly, his capacity to build alliances as he brought in all political parties of ethnic communities to the BJP alliance,” Dutta said. Even most of the CMs of the northeast whom he helped bring in as part of the northeast alliance would have supported him.

The 52-year-old politician who entered assembly in 2001, does not come with an overt BJP or RSS background, a criteria the saffron party has overlooked now for a person who has the potential to deliver more on their agenda. Within hours of him being sworn in, he went to the RSS office in Guwahati to affirm his ideological commitment. Interestingly, many of his ministers too do not have BJP or RSS background, as clear from his choice of finance and education ministers.

He plunged into activism during his college says as he was elected general secretary of Cotton College, now university, in 1992. The institution has given seven of the 15 chief ministers. He was mentored by former CM and Congress leader Hiteswar Saikia before Tarun Gogoi took him under his wings. Sarma, who was hopeful of being the CM candidate, however, revolted when Gogoi pushed for his son to inherit his legacy. Sarma left on a bitter note, only to help BJP eventually take control of the northeast states. In 2024, when BJP will be looking to increase its seats in the northeast, Sarma's role will be key to forge alliances and keep Opposition parties under pressure.

Becoming a chief minister was the dream he saw as a 22-year-old student. When he met a certain 17-year-old college student Rinki Bhuyan, he asked her to tell her parents that her suitor will be the chief minister one day. She is his wife today. Ambition pays, Sarma has proved.