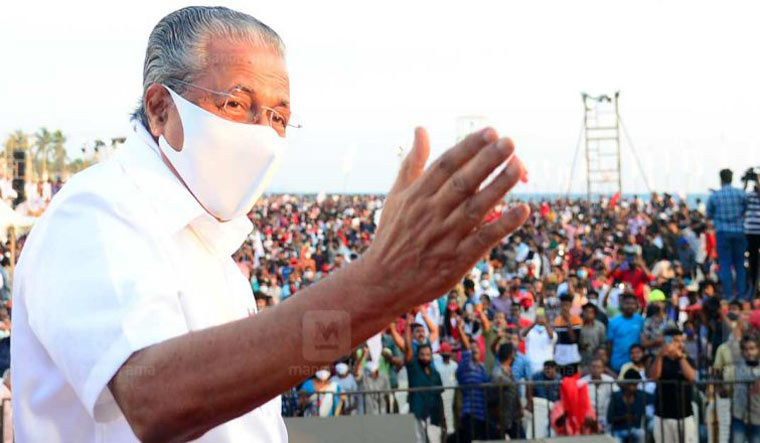 On one side was Chief Minister Pinarayi Vijayan and on the other was an array of national leaders including Prime Minister Narendra Modi, Union Home Minister Amit Shah and Congress leaders Rahul Gandhi and Priyanka Gandhi. On one side was the LDF government which had held Kerala together during the unprecedented crisis including Nipah, floods and COVID-19 and on the other was an opposition comprising the Congress and the BJP which limited their duty to demanding resignation of the CM on every other day.

As Kerala chose again Pinarayi Vijayan and the LDF government giving it a thumping majority, it made a tryst with history.

The Pinarayi-led LDF government has swept to power winning 99 out of the 140 seats and thus becoming the first government in the last 40 years to get a second consecutive term in the state. What it broke was a precedence of alternating power between the UDF and the LDF every five years. The Congress-led UDF won 41 seats while the BJP lost the lone seat it had won in 2016.

“We trusted the people of Kerala and they reposed their trust in us,'' said Pinarayi Vijayan after the results were announced.

If one is to single out one of the most significant factors of this election, it is the Pinarayi factor. It will not be an exaggeration to say that the state had got divided into pro-Pinarayi and anti-Pinarayi war zones as the election advanced. Anchoring on the sound track record of his governance and the leadership skill that he showed during the hours of crisis—the two consecutive floods of 2018 and 2019, the Nipah scare, and the COVID-19—Pinarayi led the LDF government with confidence. The drastic improvement that the state witnessed in the public health and education sectors furthered the goodwill of his government.

The social welfare measures that the state government had initiated in the last five years—including the welfare pensions and the food security measures—furthered its popularity among the most vulnerable sections of the society.

“If Keralites felt secure and protected during the hours of crisis while the rest of the country was going through several hardships, they have only Pinarayi Vijayan to thank for. And they did thank him with their votes,'' said P.S. Krishnan, a political observer. According to him, the victory belongs exclusively to Vijayan.

What helped the LDF, apart from the image of the CM, is the smart political engineering it has been doing for quite some time. The most crucial among these factors is the entry of Kerala Congress (M) into the LDF fold despite opposition from various quarters. This has helped the Left to get a foothold into the Catholic community which had been a traditional vote bank of the Congress. The support of the Jacobite community— another Congress vote bank—also helped the LDF in qualitative terms. That the LDF could win the trust of the Muslim community too was evident in the thumping majority that the ruling alliance registered across the state.

The Sabarimala factor did not work in this election despite the fact that both the Congress and BJP desperately tried to rake it up. All top leaders of both the BJP and the Congress including Modi and Rahul Gandhi had tried to make it an issue. The Congress had even promised to bring in a legislation which would penalise women who will try to enter the Sabarimala shrine. But looking at the results, one can see that the overplaying of the issue has only backfired.

That the Congress went further down in its seats compared to 2016 elections despite putting up an unusually strong fight does not augur well for the party. Right from bringing up one of the best list of candidates it has ever had, to putting up a united fight shelving all the group differences and to using the Gandhis to the hilt across the state, the Congress had done everything right this time.

“This is an unexpected defeat. But we accept the failure,'' said Ramesh Chennithala. “But Congress will not be finished by this defeat,'' he added.

The only relief that the Congress has in this election, interestingly, is the fact that the BJP has lost its single seat. The saffron party, despite its high decibel campaigning and expectations of winning 20 seats, failed miserably and its voting percentage also has gone down.

“We will examine what went wrong. We will continue to be a strong opposition,'' said K Surendran, BJP's state president.

While the opposition leaders are scrambling to come to terms with the unexpected defeat, the resounding victory is bound to make Pinarayi stronger within the party and the LDF.