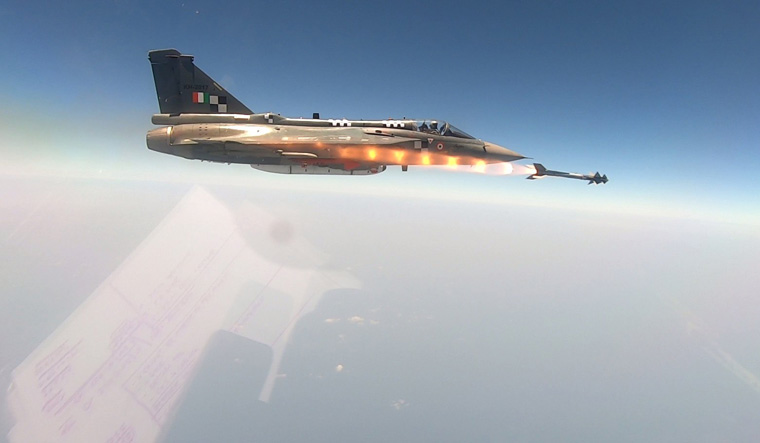 The Tejas firing the Python-5 missile | Twitter handle of DRDO

The DRDO announced on Wednesday that the indigenous Tejas fighter has been cleared to carry the Python-5 short-range air-to-air missile.

"Tejas added the 5th generation Python-5 air-to-air missile in its air-to-air weapons capability on Tuesday. Trials were also aimed to validate enhanced capability of already integrated Derby beyond-visual-range AAM on Tejas," said an official. He said the test-firing at Goa completed a series of missile trials to validate performance of the aircraft under extremely challenging scenarios.

Interestingly, both the Derby and Python-5 missile already serve the Indian Air Force in a different role—as surface-launched air defence missiles on the SPYDER system.

The Python-5 is the newest member of the Israeli Python family of short-range air-to-air missiles. While the number designation suggests there were five different generations of missiles bearing the name 'Python', in reality, there are only three: Python-3, Python-4 and Python-5.

The first two generations of Israeli short-range missiles were called 'Shafrir'. The missiles were distinguished by advances in propulsion and sophistication of their homing seekers. The Shafrir-2 missile is credited with shooting down dozens of aircraft in the 1970s, particularly in the 1973 Yom Kippur war.

The Python-3 missile is credited with shooting down at least 35 Syrian aircraft in the war between the two nations over the Bekaa valley in 1982.

How Python-5 is different

The Python-5 was unveiled by Rafael in 2003 at the Paris Air Show. The Israeli Air Force has used the missile to shoot down UAVs used by Iranian proxies such as Hezbollah.

Like most short-range air-to-air missiles produced since the late 1990s, the Python-5 is a 'high off-boresight' weapon. High off-boresight (HOBS) missiles can be fired at extreme angles from a pilot's line of sight. HOBS capability enables the pilot to effectively aim at a target by looking at it, instead of turning his aircraft towards it.

The Python-5 retains the same airframe, warhead and rocket motor of the Python-4 missile. Where it differs is in its advanced seeker.

Writing in Indian Defence Review in 2012, air commodore K.B. Menon of the Indian Air Force explained fifth-generation air-to-air missiles, such as the Python-5, "have far better seekers that allow the missile to 'see' images rather than detect points of infra-red radiation". Such 'imaging infrared' seekers enable a missile to detect and avoid infra-red countermeasures such as flares launched by an enemy aircraft and even target particular parts of an enemy aircraft, instead of merely focusing on heat emanating from the engine.

According to Rafael, the combination of the Python-5 missile's imaging infrared seeker and sophisticated algorithms enables the missile to acquire small and low-signature targets. These could include stealth aircraft, cruise missiles and UAVs, all of which are proliferating in India's neighbourhood.

The Indian Air Force has been operating the Russian-origin R-73 heat-seeking missile for decades. The R-73 has already been test-fired on the Tejas.

Wing Commander Abhinandan Varthaman is believed to have shot down an F-16 with an R-73 missile fired from his MiG-21 fighter during the aerial skirmish with Pakistan in April 2019. While the R-73 was considered a marvel in the early 1990s, the weapon is showing its age now. Writing in The Print in February this year, former Indian Air Force pilot Sameer Joshi noted the R-73 missile lacks an IIR seeker, making it "it very vulnerable to modern countermeasures".

The integration of the Python-5 thus would give the Indian Air Force's fleet of Tejas jets a timely boost.