Blinken reaffirmed the importance of the US-India relationship 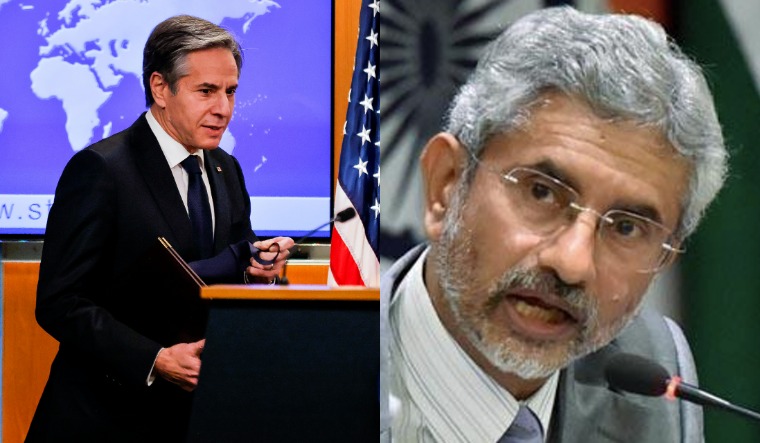 External Affairs Minister S. Jaishankar and his American counterpart Tony Blinken on Monday discussed on phone bilateral and regional issues including Afghanistan, Myanmar, and climate change. "Had a warm and productive conversation with Indian External Affairs Minister Dr S. Jaishankar to reaffirm the importance of the US-India relationship. We discussed regional security issues of mutual concern in Afghanistan and Burma and global challenges such as climate change," Blinken said in a tweet.

"Conversation covered recent developments in India's immediate and extended neighbourhood. Exchanged views on the UNSC agenda. Also discussed issues pertaining to our health cooperation," Jaishankar said in a separate tweet. Blinken spoke with Jaishankar to reaffirm the importance of the US-India relationship and cooperation on regional security issues, US State Department spokesperson Ned Price said in a readout of the call. The two leaders agreed to close and frequent coordination in support of a lasting peace and development for the people of Afghanistan, Price said.

Afghanistan figured prominently, with US President Joe Biden's recent announcement to withdraw American forces from the civil war-ravaged nation. Jaishankar had earlier said it was a big step. "It is important for the stakeholders to work together to ensure that the path it takes is the right one and the outcomes are good for the Afghan people," he said. In an interactive session with Iranian Foreign Minister Javad Zarif and Afghan National Security Advisor (NSA) Hamdullah Mohib at the Raisina Dialogue, Jaishankar also said Afghanistan needs a "double peace", that is peace within and peace around it. He asserted that India will do whatever is in its power and influence in relationship with its other neighbours to protect the best interests of the Afghan people. "We have always believed that this should be an Afghan-led, Afghan-owned and Afghan-controlled process," the external affairs minister said, adding "Afghanistan needs a double peace. It needs peace within and it needs peace around."

India had condemned the violence in Myanmar and condoled the loss of life, as it urged maximum restraint and called for the release of detained leaders. Myanmar's military had toppled the country's government on February 1 and seized power for one year, detaining top political figures, including de facto leader Aung San Suu Kyi and President U Win Myint. The coup sparked protests and other acts of civil disobedience, leading to the deaths of hundreds in military crackdown. The UN Security Council held closed consultations on the situation in Myanmar. India's Permanent Representative to the UN Ambassador T.S. Tirumurti had tweeted: "Condemn violence, Condole loss of lives, Urge maximum restraint, Our steadfast commitment to democratic transition, Release of detained leaders and welcome @ASEAN efforts."