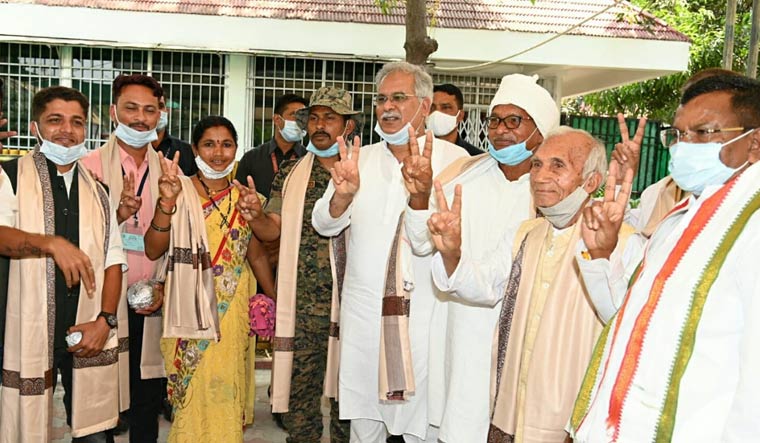 CM Bhupesh Baghel with mediators, journalists and the released commando

Rakeshwar Singh Manhas, the constable belonging to Commando Battalion for Resolute Action (CoBRA) of Central Reserve Police Force (CRPF), who was released by the Maoists on April 8, will be escorted home to Jammu by part of the mediator team that successfully secured his release.

Chhattisgarh Chief Minister Bhupesh Baghel announced this while felicitating Manhas and the team of mediators, including journalists, at the CM House on Monday. However, sources told THE WEEK that the entire team will not go to Jammu but one of the mediators—tribal leader Telam Boraiya—and two of the associate journalists Ganesh Mishra and Mukesh Chandrakar, will accompany Manhas to his hometown on April 16.

The other mediator, Padma Shri awardee social worker Dharampal Saini, is 91 years old and therefore may not take up the long journey to Jammu, sources said.

Speaking on the occasion, the chief minister said the mediator team displayed a great sense of wisdom and completed their task of getting the jawan released. “No praise could be enough for the work that the mediator team has done. Entire country had its eyes on the developments and not only people of Chhattisgarh, but the entire country breathed sigh of relief when the jawan was released. The members of the team acted as responsible citizens and undertook their task with courage,” the CM said.

Baghel added that he had promised the mother of constable Manhas that he would return safely, and that he was glad his promise could be fulfilled with the support of all involved. He also appreciated the work done by team members to ensure peace in the society.

He said after the Bijapur incident (where 22 security personnel were killed), Union Home Minister Amit Shah had also visited Bastar. “Our strategy of getting the jawan released was successful, the special director-general (Naxal operations), DG CRPF, inspector general (IG) of Police, Bastar, superintendent of police (SP) and DSP of Bijapur, members of mediating team, representatives of local social organisations and journalists played a major role in the entire episode. The local people also played a big role in successful completion of the task,” the CM said.

The CM had directed the senior police officials to make all possible efforts to get the jawan released and was regularly monitoring the proceedings and was staying in touch with the Bastar police officials, a government release said.