West Bengal: 'Star-studded' Nandigram reckons with ghosts of its past, ahead of second phase polls

Nandigram, 150km from Kolkata, was a stronghold of the communists for six decades 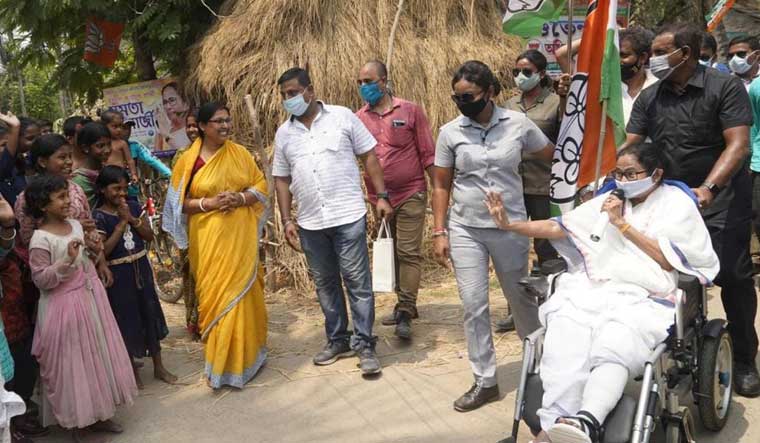 In 2007, a rural agrarian region in Purba Medinipur district of West Bengal shot into the national limelight after an anti-land acquisition movement (and the police violence that followed) shook up the very roots of the long-standing left front government and catapulted the Trinamool Congress led by Mamata Banerjee to power in the state. In 2021, the Nandigram assembly constituency, the epicentre of the movement, has to again reckon with the ghosts of the past. Once again in the national highlight, the region will witness a fierce electoral battle between Chief Minister Banerjee and Suvendu Adhikari—her right hand man who defected to bitter rivals BJP—in the second of the eight-phase elections on April 1. Both Banerjee and Adhikari were the faces of the 2007 peasant protests.

One of the campaign allegations by Mamata against Suvendu and his father Sisir—both highly influential political leaders in the area and both of whom had jumped ship from the TMC—was that they facilitated the infamous entry of police in Nandigram on March 14, 2007, which had led to the killing of 14 protesters. "This event could not have taken place without their knowledge," she said.

Nandigram, 150 km from Kolkata, was a stronghold of the communists for over six decades until 2007, when the farmers' agitation turned the tide against the left. Since 2008, Nandigram has been a bastion of the TMC, with party candidate Firoja Bibi winning the seat twice, once in a bypoll and then again in 2011. In 2016, Adhikari bagged the seat with nearly 68 per cent votes polled in his favour. The CPI(M) had then managed to garner 54,000 votes. The BJP has since made deep inroads in the area following the 2019 parliamentary polls.

Why did Mamata wish to contest from Nandigram? Revenge against her erstwhile party colleague has been touted as one possible reason. The assembly segment comprises two blocks—Nandigram I and Nandigram II—with the first having 35 per minority population and the second almost 15 per cent. With Abbas Siddiqui's ISF deciding against contesting in the constituency, TMC is confident that it can pocket the entire monitory vote share. This also became a point of counter-campaign against Mamata by Suvendu. "Out of 2,57,299 voters, around 68,000 are from the minority community. She thinks people of the minority community will vote for her. But I firmly believe that Hindus, who are against her brand of appeasement politics, will vote for me," he had said.

Banerjee on Tuesday alleged police forces from BJP-ruled states have been brought in to "terrorise" voters in Nandigram assembly constituency and also accused BJP ministers and security forces of distributing cash to lure voters. Criss-crossing the assembly segment on wheelchair in the last leg of campaigning, the TMC supremo alleged at Sonachura that huge amount of cash was being brought from all over the country and "distributed from hotels by the [BJP] ministers" to lure people cast their votes in favour of the saffron party nominee. Banerjee further alleged that cash was also being distributed from vehicles of the security forces to bribe voters and accused BJP of crossing all norms to come to power in the state.

Identity is centre-stage in her campaign. To woo a section of the Hindus, Mamata has been adopting an aggressive soft-Hindutva policy. From visiting 12 temples to reciting Sanskrit slokas to asserting her Brahmin identity, Banerjee has pulled all the stops to reach out to the electorate of Nandigram, especially to the majority community, as the party is now apprehensive of a Hindu consolidation in favour of the BJP.

In a show of might, Union Home Minister Amit Shah on Tuesday held a massive roadshow in Nandigram and called upon people to ensure the defeat of Banerjee. He stressed that defeating Banerjee from Nandigram would be a precursor to the much-desired change that Bengal had long been waiting for. Shah said that the saffron party's victory margin "should be so big that no politician would dare to fool the masses with false promises ever again". "In Nandigram, we don't just intend to ensure Suvendu's victory but also seek to guarantee development. I would like to request the people here to vote for Suvendu in large numbers so that no one in the future dares to play with the sentiments of 'Ma', 'Mati' and 'Manush'," he said.

"By defeating Mamata didi in Nandigram, you can bring about the much-desired change in West Bengal. You defeat her here; the TMC will automatically get defeated in other parts of the state," he said.

For the BJP, Hindu voter consolidation is crucial for victory in the state. And their policies are aimed exactly at that. Communal polarisation was first witnessed in the area when the saffron camp managed to take out a massive Ram Navami rally in 2015 and many TMC supporters had even taken part in the programme. Riding on the left's declining vote share and grievances of the Hindus, the BJP made deep inroads into the area. The saffron party's meteoric rise was noticed in the 2016 byelection to the Tamluk Lok Sabha seat, under which Nandigram assembly constituency falls, when it secured the second position by bagging 1,96,450 votes. The BJP further consolidated its position in 2019, bagging nearly 37 per cent of votes and coming runners-up. It is to be seen whether the BJP can improve its Lok Sabha result with the influential Adhikari family by its side.

For Suvendu personally, a victory could be a crucial marker in his ascension in the state politics; it can possibly propel him into leading the BJP in Bengal, were the party to win the battle of the hustings. While Banerjee has been camping in Nandigram for the last four days and campaigned even during the Holi festival, BJP has fielded its big guns, including Shah, UP Chief Minister Yogi Adityanath and superstar Mithun Chakraborty to defend Adhikari's turf.