Jaishankar, Qureshi keep everyone guessing on a possible meet at Dushanbe

Both leaders will be in Dushanbe for HoA-IP ministerial conference 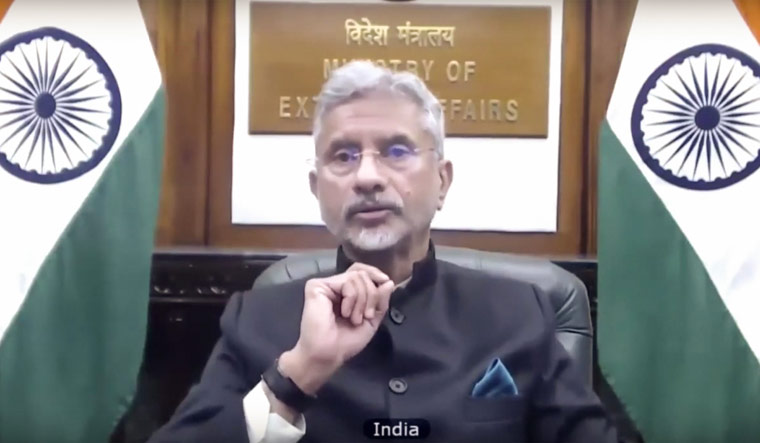 Will there be a meeting between External Affairs Minister S. Jaishankar and his Pakistani counterpart Shah Mahmood Qureshi? All the eyes are on Dushanbe, Tajikistan, where both the leaders will arrive for the Ninth Heart of Asia-Istanbul Process (HoA-IP) Ministerial Conference, on Tuesday.

The foreign ministries on both sides remain tight-lipped. Speaking to reporters en route to Dushanbe, Qureshi has been quoted as saying that no such meeting had been “finalised’’. He also denied reports that there has been quiet diplomacy to restore full diplomatic relations between the two countries. "No such decision yet,’’ he reportedly said.

Nonetheless, speculations continue, especially since the past month as relations between the two neighbours have swiftly moved from outright hostility to thaw. Last month, a ceasefire along the the Line of Control was announced by the director general of military operations on both sides. On Friday, a flag meeting was held at the brigade command level in the Poonch sector to ensure that the ceasefire agreement holds. “Post the DGMOs Understanding 2021, a Brigade Commander Level Flag Meeting was held between Indian and Pakistan Army at Poonch Rawalkot Crossing Point on 26 Mar 2021 to discuss implementation mechanism as per the understanding,” the Indian Army had tweeted.

There have been other signals as well. Pakistan Army chief General Qamar Javed Bajwa, at a forum this month, waved a white flag, asking India to “bury the past and move forward’’. The two countries have also held a meeting of the Indus Water commissioners last week after two years.

Jaishankar has been non-committal too on a possible meeting with Qureshi. “My scheduling is in progress. So far, I do not think any such meeting (is scheduled)," said Jaishankar at a public function last week. But rumours abound.

A meeting between the two leaders would suggest that the relationship between the two countries have certainly taken a turn for the better. There is speculation that the meeting would be the first step before reinstating the high commissioners in both countries. But like with everything in India-Pakistan relations, there isn't any clarity on if such a meeting would take place.

Beyond the Indo-Pakistan dynamics, the conference is an important step forward for Afghanistan. The theme for the conference is 'Strengthening Consensus for Peace and Development'. It comes at a crucial time when violence continues to spiral out of control in Afghanistan, as there is no ceasefire agreement between the Taliban and the government.

For India, the meeting is a chance to take forward its role in Afghanistan. It is clear from the comments made by the Afghanistan Foreign Minister Haneef Atmar during his visit to Delhi that Kabul hopes that New Delhi will play a greater role to ensure peace in the region. Atmar met NSA Ajit Doval and Jaishankar. During a media interaction, Atmar said India had legitimate interests in peace and stability in the region. “There are those out there that threaten not just Afghanistan but also India. So, India is a legitimate partner in peace-making and we are seeking a greater role for India in the process,” he has been quoted as saying.

Jaishankar is also expected to meet his Iranian counterpart Javad Zarif as well as hold a bilateral meeting with his Tajikistan counterpart Sirojiddin Muhriddin.