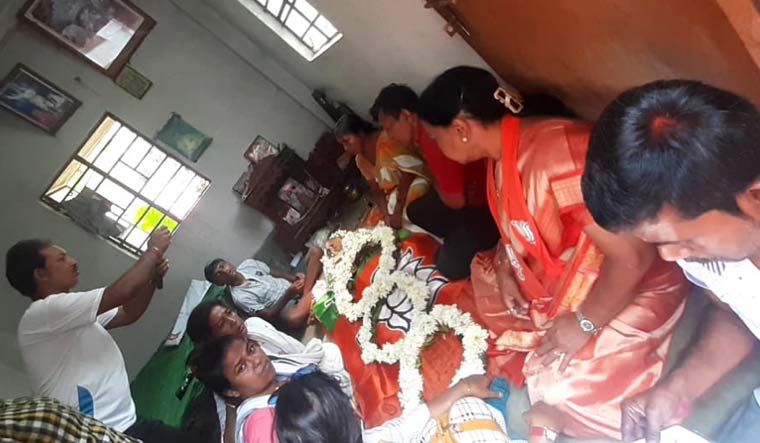 Shova Majumdar, an 85-year-old woman, was in the headlines in the first week of March after she claimed she and her son, who was a BJP activist, were assaulted by TMC members.

Shova died on Monday morning, triggering a wave of condolence messages by BJP leaders, including party chief J.P. Nadda and Union Home Minister Amit Shah. The cause of death was not known immediately.

According to reports, Shova and her son, Gopal Majumdar, were assaulted in the North Dumdum area, which fell under Nimtha police station jurisdiction.

Shova claimed she and her son were beaten up by TMC "goons" and that they threatened her son not to disclose the incident to anyone. The incident triggered nationwide outrage, with even the National Commission for Women taking suo moto cognisance of it.

However, the state police rejected the claims Shova was assaulted and claimed her face was swollen owing to other ailments. The case took a turn when relatives claimed Gopal used to beat up his mother.

Nadda condoled the death of Shova. Nadda tweeted "May God comfort the soul of Nimta's aged mother Shova Mazumdar ji. Due to her son, Gopal Majumdar, being a BJP activist, she had to pay with her life. Her sacrifice will be remembered forever. She was also mother of Bengal, daughter of Bengal. The BJP always fights for security of mothers and daughters."

Amit Malviya, the head of the BJP's IT operations and a co-in-charge for West Bengal, tweeted, "This daughter of Bengal, someone’s mother, someone’s sister... is dead. She was brutally assaulted by TMC cadres but Mamata Banerjee didn’t have a word of compassion for her. Who will heal the wounds of her family? TMC’s politics of violence has bruised Bengal’s soul..."