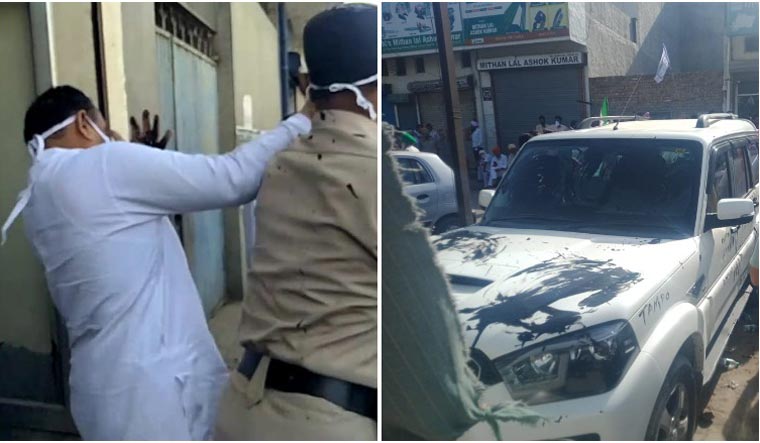 Arun Narang being thrashed; black ink was thrown on his vehicle

A BJP MLA in Punjab was allegedly thrashed and his clothes torn by a group of farmers at Malout in Muktsar district on Saturday, police said.

When Abohar legislator Arun Narang reached Malout along with local leaders to address a press conference, they got surrounded by a group of protesting farmers and black ink was thrown at them, officials said.

Some police personnel took the MLA and local leaders to a shop. But later when they came out of it, the protesters allegedly thrashed them and tore Narang's clothes, police said.

Narang was later escorted to a safer place by the police, officials said.

Deputy Superintendent of Police (Malout) Jaspal Singh said the protesters were adamant that they would not allow the BJP legislators to hold the press conference. A police official sustained a minor injury in the incident, he said.

A video has surfaced on social media, purportedly showing the MLA in torn clothes being shifted to a safer place by the police.

Large group of #Farmers attacked & brutally thrashed Arun Narang, @BJP4India MLA Abohar. Narang had come to #malout in #Punjab to hold a press conference against@PunjabGovtIndia when he was attacked. #Farmers threw ink at him & tore his clothes#FarmersProtest pic.twitter.com/tBiiBVce4M

Later, Narang told PTI that he was "punched" by some people.

"I was punched a lot and my clothes were also torn off," he alleged.

The BJP legislator said he had gone to Malout to address a press conference but the protesters did not allow it. They got violent and surrounded him, the MLA claimed.

Asked whether he has lodged a complaint in this matter, Narang said he will talk to the party leadership over this issue.

Darshan Pal, the leader of Samyukta Kisan Morcha, an umbrella body of farmers' union, spearheading the agitation against the central agri laws, said, "Today, farmers protested against BJP MLA from Abohar. Under adverse circumstances, it turned violent and the MLA was physically assaulted.

"It is a matter of regret that an elected representative was treated this way. We do not encourage such behaviour. We strongly condemn this act," he said in a statement.

Pal also said the Samyukta Kisan Morcha appeals to all protesters to remain peaceful and disciplined.

The ruling Congress in Punjab, the BJP, as well as the Shiromani Akali Dal (SAD) condemned the incident.

Such "unlawful behaviour" has no place in a democracy and the farmers' protest will be weakened by these incidents, State Congress chief Sunil Jakhar said.

BJP national general secretary Tarun Chugh slammed the Amarinder Singh-led government over the incident and claimed that it has "exposed the complete collapse of law and order in the state".

Describing the incident as a "murderous attack" on Narang, he accused the ruling Congress of engineering it. Amarinder Singh was "instigating such attacks in order to stifle the voice of the BJP", Chugh alleged and demanded that the chief minister resigns.

SAD chief Sukhbir Singh Badal termed the "violent attack" on Narang "deplorable" and demanded an impartial inquiry to fix the responsibility for the failure of the police in protecting the dignity of an elected representative.

He appealed to everyone to exercise restraint to ensure that peace and communal harmony in the state was not disturbed.

SAD leader Daljit Singh Cheema while describing the incident as "painful" said in a democracy, everybody has a right to put forth his views. There is no place for violence in society, he said.

Notably, BJP leaders have been facing the ire of farmers for the last several months in the state. Agitating farmers have been opposing the programmes of the saffron party leaders in the state over the farm laws issue.

Thousands of farmers have been protesting since late November at Delhi borders with Haryana and Uttar Pradesh, demanding a rollback of the Farmers' Produce Trade and Commerce (Promotion and Facilitation) Act, 2020, the Farmers (Empowerment and Protection) Agreement on Price Assurance and Farm Services Act, 2020 and the Essential Commodities (Amendment) Act, 2020.

The protesting farmers have expressed apprehension that these laws would pave the way for the dismantling of the minimum support price system, leaving them at the mercy of big corporations.