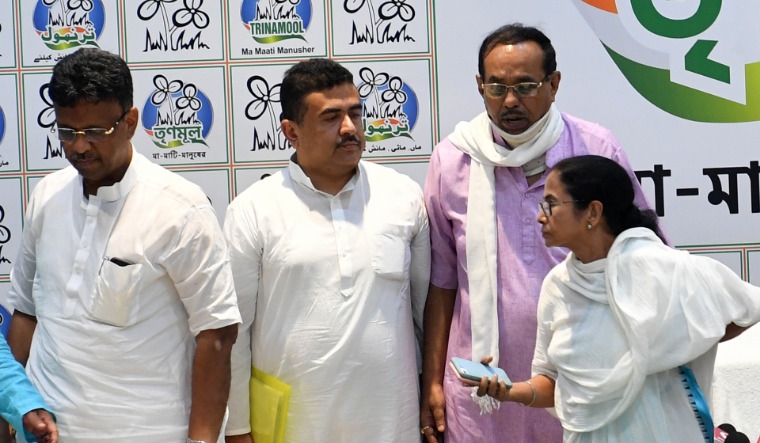 Nandigram, which first grabbed national headlines in the mid-2000s because of the anti-land acquisition agitation led by Banerjee, is back in news again after the West Bengal chief minister decided to take on her former protege Suvendu Adhikari, who joined the BJP in December, on his home turf. This constituency will be the defining race in Bengal, pitting TMC's soft Hindutva verus BJP's hard Hindutva.

Both TMC and BJP leaders admit that Nandigram stands communally polarised. The shoots first appeared after the 2013 panchayat polls when elected Muslim members were given prominent roles in Zilla Parishads and the ruling party's district unit. A massive Ram Navami procession in the area in 2016, in which many TMC workers participated, widened the crack.

The BJP, which hardly had any presence in the area, made massive inroads by bagging over 1.96 lakh votes in the 2016 by-elections to the Tamluk Lok Sabha seat under which the Nandigram assembly segment falls.

In the 2019 Lok Sabha election, the BJP further consolidated its position, cinching over 5.34 lakh votes. Local BJP leader Sabuj Pradhan claimed, "Nandigram is sitting on a tinderbox, and only the TMC's appeasement politics is responsible for it. If you deny the majority community its rights, you will have to face the consequences."

Sheikh Sufiyan, deputy chairman of the Zilla Parishad and Banerjee's election agent, described the charge of Hindus being denied government benefits as a "disinformation and divisive" campaign by the BJP. Nandigram Block 1 TMC president Swadesh Das said the BJP will be taught a lesson in secularism in Nandigram. "If the BJP thinks it will get the entire Hindu votes, they are living in a fool's paradise," he said.

Political analyst Biswanath Chakraborty feels the BJP has, in a way, already become successful by making the TMC toe its line. "The BJP may win or lose Nandigram but it has been successful in forcing the ruling TMC to follow its Hindutva line for votes," he said.

"I am a daughter of a Hindu family", asserted Mamata Banerjee and went on to recite 'Chandi Path', an ode to Goddess Durga. By the time she got immobilised and confined to a hospital bed in Kolkata following a mishap at the hustings which the TMC alleged was a conspiracy to "take her life" and the BJP a "well-scripted drama", the TMC boss had visited 12 temples in two days.

Nandigram, which first grabbed national headlines in the mid-2000s because of the anti-land acquisition agitation led by Banerjee, is back in news again after the West Bengal chief minister decided to take on her former protege Suvendu Adhikari, who joined the BJP in December, on his home turf.

Banerjee visited 12 temples and a mazaar, Islamic mausoleum, during her campaign in Nandigram this week which had to be cut short after she got injured.

Adhikari, who claimed Banerjee recited the 'Chandi Path' incorrectly, called the TMC supremo an "adulterated Hindu who cannot wash away the sins of appeasement politics". Banerjee's temple-hopping and chanting shlokas at an election rally are being seen as an effort to counter the BJP's strong Hindutva push, as also an attempt to blunt the criticism over her alleged Muslim bias. "Don't play the Hindu card with me," she declared at the rally on Tuesday.

Nandigram has over 30 per cent Muslim population, which has stood solidly behind the TMC over the last decade. Adhikari is eyeing the majority of the rest 70 per cent, escalating the fight for Hindu votes. Adhikari has often told his election rallies that he has complete faith in the "70 per cent electorate and is not worried about the rest 30 per cent". Although senior TMC leaders insisted that her visit to temples was part of the party's "inclusive policies", rival BJP said it was aimed at denting the saffron party's burgeoning Hindu support base as she had realised that only the Muslim votes were not sufficient to see her through.

Initially, Furfura Sharif cleric Abbas Siddiqui's ISF was to field a candidate for the seat as part of the Left-led grand alliance, a move that could have divided a significant chunk of the Muslim votes. However, later the alliance agreed to leave the seat for the CPI(M) which fielded its youth wing DYFI's state president Minakshi Mukherjee, much to the relief of the TMC.

"We don't believe in communal politics, unlike the BJP. Suvendu is a traitor and has forgotten all the ideals that he had learnt in the Congress and TMC. That is why he is trying to make it a fight between the Hindus and Muslims. We have no religious agenda," senior TMC MP Saugato Roy told PTI.

Hitting back, Adhikari questioned the need for the chief minister to visit so many temples. "She decided to contest from the seat due to the 30 per cent population of a specific community. You see the leaders who are moving around with her in Nandigram and you will understand," he told PTI. "I am a Hindu, and I don't want to divide communities. It is the TMC which is trying to drive a wedge between them with its appeasement politics," Adhikari added.

According to TMC sources, the soft Hindutva push by the TMC may be a new thing in Nandigram, but it has been the party's strategy following the electoral reverses in the 2019 Lok Sabha elections. The party's decision to organise 'Brahmin Sammelan', give allowances to Sanatan Brahmins and extend financial assistance to Durga Puja committees were all part of that carefully planned strategy, they said.

Adhikari locked horns with his former party seeking to appropriate the legacy of Nandigram movement just days ahead of the assembly polls. The TMC observes March 14 as 'Nandigram Divas' to pay respect to the 14 people killed in police firing on this day during an anti-land acquisition stir in 2007. The TMC, after coming to power, has also been observing the day as Krishak Divas.

Adhikari, who was considered the face of the movement, lashed out at the ruling TMC, saying that "opportunists" who have given promotion to the officers responsible for the 2007 police firing have no right to seek votes from the people of the area as they have insulted the sacrifices made by the agitators. Without naming Banerjee who is also the chief minister, Adhikari said that those who had forgotten Nandigram for 12 years are now coming to seek votes.

Banerjee has left her Bhowanipore constituency in Kolkata to contest the Nandigram seat. The anti-land acquisition movement there had catapulted her party to power in 2011. She paid tributes to the agitators killed in a police firing in 2007 and participated in a rally on a wheelchair to commemorate the day in Kolkata. Banerjee said that she has chosen to fight "anti- Bengal forces" in the constituency as a mark of respect to the martyrs.

At a programme held in Nandigram, Adhikari said, "Fourteen people were martyred in police firing in 2007. I have been coming here every year since 2008 to pay tribute to the sacrifices made by the people of Nandigram. "Whether it is an election season or not, it hardly matters to me, unlike the opportunists who are now coming to this place," he said offering floral tributes to those killed in the police firing.

Banerjee, then the opposition TMC leader, had spearheaded a movement against the Left Front government's acquisition of arable land in Nandigram and Singur for industrialisation. Suvendu's was then her trusted lieutenant in Nandigram.

Adhikari won the Nandigram seat in the 2016 assembly election, while another TMC candidate emerged victorious from the constituency in 2011.