Bihar govt warns of action against farmers over stubble burning 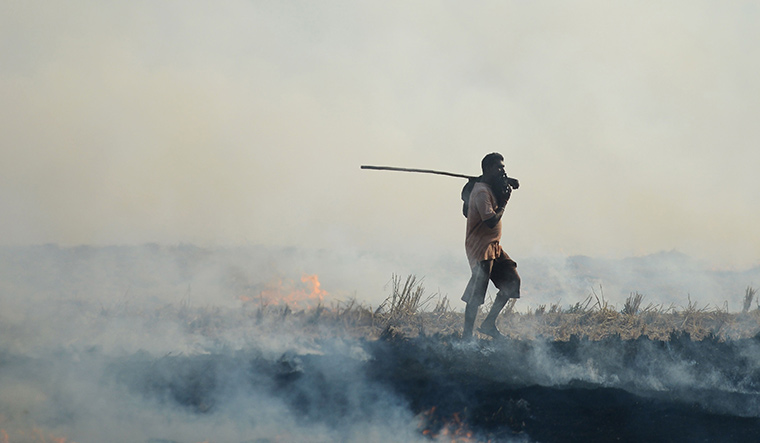 Speaking in the assembly during a debate on the agriculture department's budgetary demand, Singh said the problem of stubble burning is getting bigger in several districts of the state and the government has taken initiatives to create awareness among farmers as it reduces the fertility of the soil.

Chief Minister Nitish Kumar has asked officials to carry out aerial inspection using helicopters and if the need arises, they must try to make farmers understand the ill effects of stubble burning, he said, adding that farmers in the state have started the practice after seeing it in Punjab.

"If farmers do not understand, the state government will take punitive action against them," the minister said.

"We cannot allow the mother earth to burn like this as it nourishes us," he asserted.

Further, Singh said the government has given its nod to the ''Bihar Agriculture Investment Promotion Policy 2020'' to attract and promote private investment in the sector.

The idea behind the policy is to attract individual investors and entrepreneurs for setting up processing units for makhana, fruits, vegetables, honey, medicinal plants, aromatic plants, maize, tea and seeds in the state, Singh said.

Individual investors and farmers' producer groups will get 15 per cent and 25 per cent, respectively, as a capital subsidy of the project cost, he said.

Nitish Kumar's decision to repeal the Agriculture Produce Market Committee (APMC) Act in 2006 has abolished the role of middlemen completely, besides raising both production and productivity significantly in the state, the minister said.

The farmers of the state have wholeheartedly welcomed the three new farm laws, he claimed.

"I am quite confident that the agriculture sector in Bihar will witness revolutionary changes following the implementation of the new farm laws. The prestige and honour of both farming and farmers will be re-established," Singh said.

The state government has transferred a total of Rs 10,699.78 crore into the bank accounts of farmers between 2018 and 2021 under the Direct Benefit Transfer (DBT) scheme, he said, adding that the amount included agriculture input subsidy, diesel subsidy, input for organic vegetable production and PM-Kisan.

The state's agriculture roadmap has led to a massive increase in production and productivity in the past 15 years, Singh said, citing data, as per which rice production has increased to 69.53 lakh metric tonnes from 37.08 lakh mt and wheat production increased to 55.79 lakh mt from 28.23 lakh mt.

The agriculture department's budgetary demand was passed in the assembly by voice vote amid a boycott by opposition MLAs, including those of RJD, Congress and Left parties.

Though a cut motion was moved by Congress member Vijay Shankar Dubey, it was rejected by the House.