How Chhattisgarh CM is orchestrating strategy of Congress in Assam 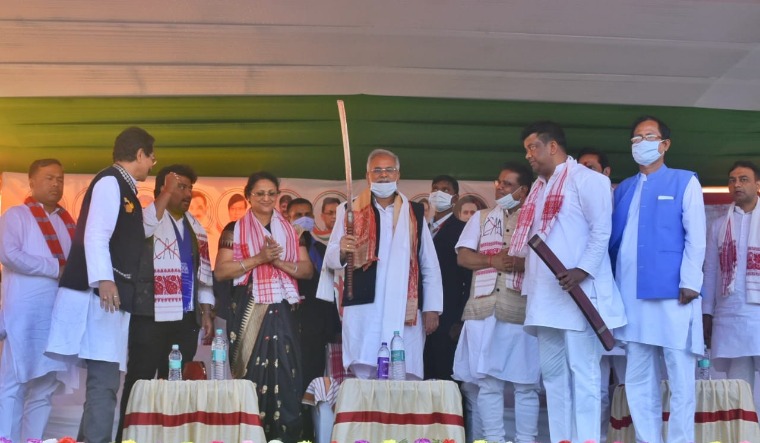 With Assam gearing up for an intense battle of votes in the upcoming Assembly elections, the opposition Congress has adopted the ‘Chhattisgarh model of booth management’ to reclaim power from the ruling BJP-led alliance.

In 2018, Chhattisgarh Congress had defied all exit polls and shocked political pundits, winning 68 seats out of 90, thereby snatching power from BJP after 15 years. Congress currently has 70 MLAs there as it won two by-elections.

A senior official of the Congress party, who came from outside Assam and has been camping here for almost one month, told PTI that a new energy level is seen in the party workers after a team from Chhattisgarh started working on the ground.

"Former chief minister Tarun Gogoi's demise affected the morale of the Assam Congress to a large extent as he was a father-figure to all. When we came in early part of January, people were not very enthused against BJP's aggressive campaign," he added.

After Chhattisgarh Chief Minister Bhupesh Baghel was appointed as the observer by the All India Congress Committee for its Assam unit for the upcoming Assembly polls, things started moving very fast in a positive direction.

"In the last 15-20 days, the entire atmosphere has changed and it is now the rejuvenated Congress carrying out an aggressive campaign against the BJP and its allies. Now, the party is very confident to give a tough fight to the ruling NDA," said the official, who did not wish to be identified.

Baghel was by the side of party leader Rahul Gandhi when he kick-started the Assam campaign with a rally at Sivsagar on February 14.

The Chhattisgarh chief minister is making frequent trips to the poll-bound northeastern state to take stock of the party readiness for the elections.

Explaining the strategy, the official said, the Chhattisgarh team is focussing on micro-level booth management, which helped them regain power from the BJP there in 2018.

"Around 15 specialised trainers have come and they have already conducted nearly 100 training sessions since February 1, covering 100 constituencies. Within next 2-3 days, we will cover all the 126 constituencies in Assam," the official said.

After the first level of training is over, senior party functionaries will visit each constituency to assess the ground situation, followed by second and third level of training by different set of trainers until the elections are over.

"BJP has the concept of Prishtha Pramukh or Panna Prabhari to manage voters in each polling booth. However, we have seen their model failing in Chhattisgarh as it is more of a psychological game plan. We are working on pure science and mathematics," he said without explaining further.

The official, however, clarified that the Chhattisgarh team under Baghel will not have any say in selection of candidates and it will be fully decided by the Assam Congress as local politics are understood better by the leaders from the state.

When contacted, Baghel's political adviser Vinod Verma said, "Our teams are working closely with the Assam Congress. We want to create a system that is election agnostic and candidate agnostic."

Asked to elaborate what he meant by the word "agnostic to election and candidates", the journalist-turned-political strategist said they are working to strengthen the party from the ground.

"Issues and leaders are important, but only efficient and meticulous booth management can make a party win the elections," Verma told PTI.

Verma is coordinating all the activities of the Chhattisgarh team with that of the party workers from Assam and is stationed here since January 26. He will monitor the entire election exercise till results are out.

The Congress, which was in power for 15 years in Assam since 2001, has formed a grand alliance with AIUDF, CPI, CPI (M), CPI(ML) and Anchalik Gana Morcha (AGM) to fight the upcoming Assembly election.

The election to the 126-member Assam Assembly is likely in March-April.

The 2016 elections gave a fractured mandate and no party got an absolute majority in the current Assembly. The BJP is currently the single-largest party with 60 MLAs, while its allies Asom Gana Parishad (AGP) and Bodoland People's Front (BPF) now have 13 and 11 lawmakers, respectively. The ruling coalition also has the support of an independent MLA.

The opposition Congress has 19 MLAs at present, while the All India United Democratic Front (AIUDF) has 14 members in the House in Assam.