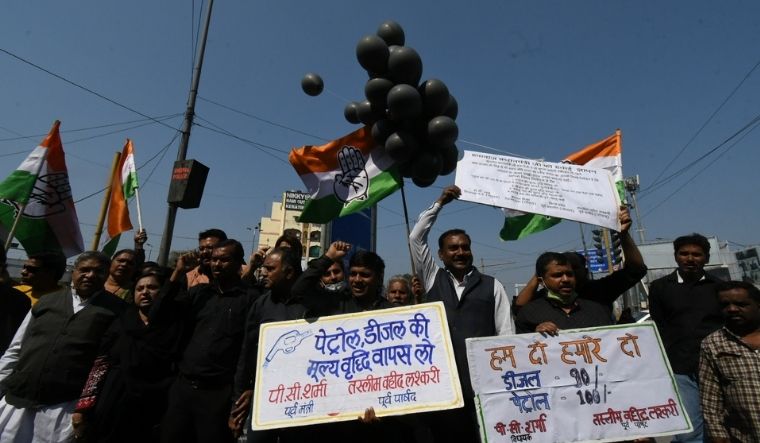 Demonstrators during the half-day statewide bandh in Madhya Pradesh | Supplied

The Madhya Pradesh Congress claimed total success on a half-day statewide bandh called against rise in fuel and domestic gas prices on Saturday.

Overall, the bandh seemed to have evoked a mixed response across the state with several markets in capital Bhopal and other cities remaining closed for a few hours, while some others opening up after Congress workers calling for bandh left the spot, reports said.

In Bhopal, the bandh was led by Rajya Sabha member and former chief minister Digvijaya Singh. Following a confrontation with police, ex-minister P.C. Sharma and 11 others were detained. Sharma claimed the police were trying to scuttle the bandh call by forcing shopkeepers to open up establishments. There were reports of Congress workers getting into confrontation with BJP workers as well as police in certain places.

Photographs and videos from different cities and towns of the state were uploaded on the social media accounts of the state Congress claiming a successful bandh.

Ex-chief minister Kamal Nath formally released a statement thanking the people of the state and especially, the commercial establishments for making the bandh called on the issue of public welfare totally successful.

He also expressed gratitude to the lakhs of Congress workers for working to make the bandh successful.

“The administration took oppressive steps at the direction of the BJP government against our workers. Several workers appealing peacefully for the bandh were arrested, but our workers will not be intimidated by such action,” Nath said. He added that the phase-wise agitation of larger scale will continue and Congress will always stand by the people.

When the Congress government was at the Centre, the price of crude oil was $108 per barrel and petrol price in the country averaged at around Rs 70 per litre. Diesel cost Rs 57 per litre. But now when crude oil is available at $63 per barrel, petrol price is close to Rs 100 and diesel is not far behind. In the tenure of the Modi government, crude oil prices saw a dip of 41 per cent, but petrol and diesel prices went up by 26 and 40 per cent respectively.

The ex-CM also attacked the BJP government and chief minister Shivraj Singh Chouhan saying that they would demonstrate and ride bicycles at every slight hike in fuel prices, but were now silent and even trying to justify the price hike.

Medical education minister Vishvas Sarang, however, called the bandh by the Congress a political drama and asked why they were not protesting in Rajasthan, Chhattisgarh and Punjab. Sarang also said the bandh was totally a flop and the attempts of some Congress workers at disruptive actions were foiled by the administration.