Chhattisgarh: ‘Dandi March 2.0’ from March 12 to call for peace in Naxal-hit areas 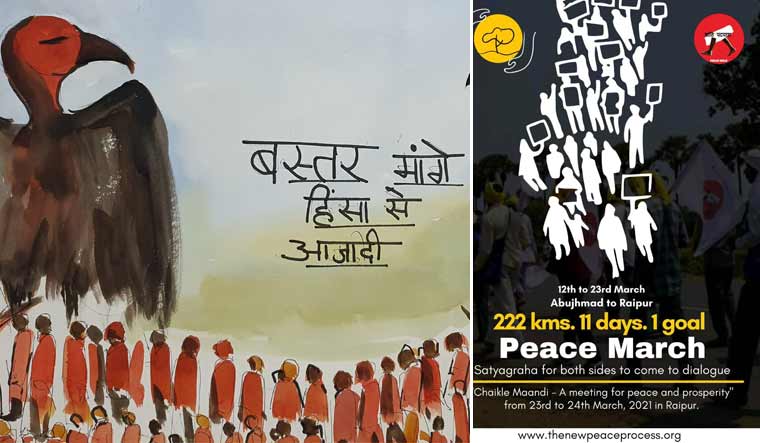 Collage: (Left) A painting depicting the Bastar issue made by Shantanu Mishra, an artist from Durg (Chhattisgarh) during the New Peace Process, (Right) A poster advertising the Peace March

Exactly 91 years after Mahatma Gandhi led the Dandi March as a mark of civil disobedience against colonial rule, the people of Maoist-affected areas in Chhattisgarh will be taking out "Dandi March 2.0" to call on both the government and Maoists to initiate dialogue towards peaceful resolution of Naxal issues.

The participants of the 11 day, 222-kilometre peace rally will be mainly the kin of the victims and survivors of Maoist violence, as well as those who were affected by the actions of security forces. Their supporters from across the country are also expected to participate.

The foot march, an initiative under the “New Peace Process” will start on March 12, on the anniversary of Gandhi-led Dandi March, from Abujhmad in Narayanpur district in the core Naxal-infested area and culminate in Raipur, the state capital, on March 23. It will be followed by a mass meeting for peace and prosperity ‘Chaikle Maandi’ in Raipur on March 23-24.

The Convener of the New Peace Process, Shubhranshu Choudhary, told THE WEEK that between August and October last year, a phone-based opinion poll (which, for the first time, included the option of responding in tribal languages) found 92 per cent participants of the opinion that the age-old Maoist problem in Central India should be resolved by initiating dialogues and not by the use of guns.

“It is to take up that mandate forward that a group of kin of victims/survivors of both Maoist violence and government (security forces) actions, mostly women, and their supporters will take up the foot march to urge both sides to start dialogues to resolve the problem which has killed thousands,” he said.

Under the New Peace Process, work has also been taken up on collating a “Victim’s Register” through which the families of victims and survivors of Maoist violence and security forces actions are coming together for the first time to urge both sides to find a solution, Choudhary said.

On March 24, an “art for peace” initiative will be held where painters from all across Chhattisgarh and country have been urged to participate and paint the walls in public places of Raipur with messages of peace.

The New Peace Process was initiated in June 2018 by 24 tribal and supporting groups who were of the view that peaceful resolution of the problem should be given a chance during the next few years. After that, these groups felt, the issue might turn into that of a violent inter-group rivalry among the tribal Maoist commanders that might see the local tribal people suffer far more, including loss of lives and damage to property.

Choudhary said there is a time window of about five years in Chhattisgarh before things start going the Jharkhand way of internal rivalry related violence, harming the local tribals much more.

“So, there needs to be a strong people’s movement demanding that both sides come forward for dialogue and peaceful resolution as no one is supporting violence anymore. The peace process and particularly the opinion poll results are very important in this context,” he had told THE WEEK last year.

Under the New Peace Process, apart from the peace rally and cycle rally for awareness on peace initiatives among people, steps have also been taken to ensure habitat rights (under Forest Rights Act, 2006) for the Particularly Vulnerable Tribal Group (PVTG) Abujhmadia tribe.

Also another initiative has been taken to secure alternative land under the Forest Rights Act for roughly 50,000 people from Bastar who were forced to leave their villages and escape to neighbouring states after the Salwa Judum movement was initiated in 2004.

A series of meetings – called Chaikle Maandi (meetings for peace and prosperity) – were also started where prominent individuals and groups would interact among themselves and with violence-hit families from the region. The first of such meetings was held on October 2, 2020.