All states/UTs reported decline in COVID-19 cases in the last one month: Centre

India’s total active caseload is just 1.25 per cent of the total positive cases 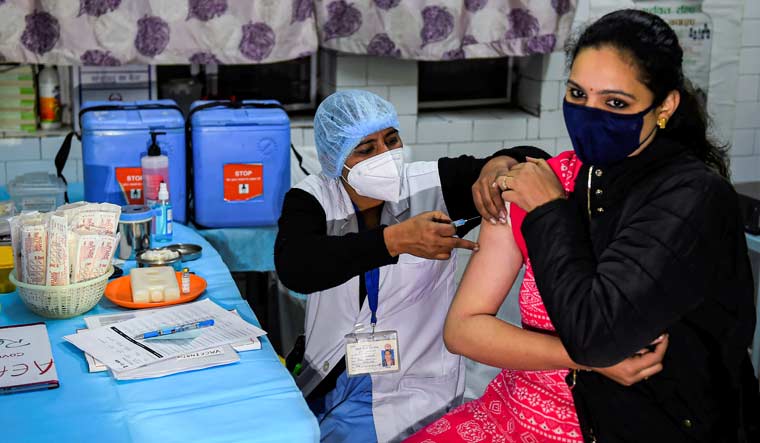 A health worker conducts the dry run of COVID-19 vaccination at a healthcare center in Daryaganj, New Delhi | PTI

All states and union territories, including the two ‘outlier’ states of Maharashtra and Kerala, have reported a decline in COVID-19 cases in the last one month. According to the Union health ministry, at 1.36 lakh, India’s total active caseload is just 1.25 per cent of the total positive cases reported in the country. The decline in active cases in Maharashtra has been substantial in the last one month—from 53,163 on January 17 to 38,307 on February 17, the ministry said in a statement.

However, numbers in Maharashtra have been on the rise for the last one week, with over 3,000 cases being reported each day for the first time since mid-January. In the week that ended on February 14, the state reported 20,207 new cases. This is as compared to 17,672 in the week of February 1-7. Contrary to the health ministry's latest communique showing a decline in the number of cases in the state in the last month, the weekly analysis has shown a spike, prompting the state government to issue a lockdown warning if those in the state did not follow COVID-appropriate behaviour.

Across the country, however, COVID-19 appears to be on the decline —18 states have not reported any deaths in the last 24 hours. These include Uttar Pradesh, Rajasthan, Andhra Pradesh, Jammu & Kashmir, Jharkhand, Puducherry and Himachal Pradesh. While India recorded 11, 610 new cases in the last 24 hours, the trend of a majority of cases in the two states has continued—27.31 per cent of the total cases in Maharashtra and 44.97 per cent in Kerala. In the last 24 hours, 100 people died of COVID-19, according to the health ministry. Six states account for 81 per cent of the daily deaths, with Maharashtra (39) and Kerala (18) having the maximum number of deaths. The mortality rate is higher in Maharashtra than in Kerala.

With 90 lakh persons vaccinated until February 17, the Centre is still far from its 3 crore target of healthcare and frontline workers as part of the first phase of vaccination, and 30 crore persons by July. By the end of this week, states would need to adhere to their February 20 deadline of scheduling all their healthcare workers for the first dose, and by February 24, those left out among them would need to be scheduled, too. By early March, states would have to adhere to the deadline of scheduling the frontline workers, too. As of now, 61.5 lakh healthcare workers have got their first dose, 2.7 lakhs have received their second dose, and 25 lakh frontline workers have received their first dose.

Eight states are accounting for 57.8 per cent of the total vaccine doses given in India. Uttar Pradesh alone accounts for 10.4 per cent doses, followed by states such as Rajasthan, Maharashtra, and Gujarat. On Wednesday, the Trained Nurses Association of India (TNAI) declared its support to the India's vaccination drive, asking its branches in 33 states to "strengthen" the government's vaccination drive by getting vaccinated and communicate to others also. "We must volunteer to be vaccinators so that maximum number can be vaccinated within the shortest period. TNAI will be using all its communication channels to pass the message to all our members and the entire nursing fraternity," the association said in a statement.

Global cases of coronavirus are also on the decline—new cases have fallen by 16 per cent in the last week, and deaths, too, have fallen by 10 per cent, according to the WHO. Though the pandemic is still not over, experts are debating the issue of the virus becoming endemic. In a poll conducted among scientists by Nature, 89 per cent of scientists (immunologists, virologists) felt that SARS-COV2 was either very likely or likely to become endemic, or one that continues to circulate in pockets of the global population. The target of elimination in certain regions, was unlikely, about half of those surveyed felt.