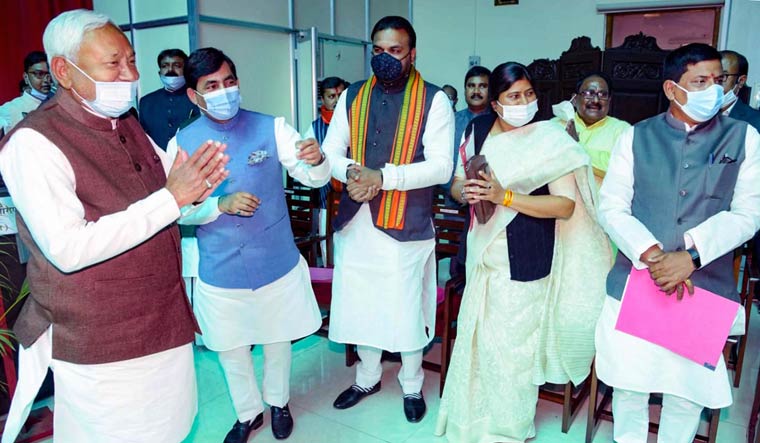 The much awaited expansion of the Nitish Kumar cabinet in Bihar took place on Tuesday with the induction of 17 members, including Syed Shahnawaz Hussain, the high-profile Muslim face of the BJP which walked away with the lions share.

The former Union minister and party national spokesman, who was the first to be administered oath of office by Governor Phagu Chauhan, has been given the industries portfolio, according to a communication issued by the Raj Bhavan later in the day.

Hussain, a three-term Lok Sabha member who got elected to the state legislative council last month in a surprise move by the BJP, was among nine inductees from the party which now has 20 members in the state cabinet.

The Chief Ministers JD(U), which has suffered diminution in clout because of its poor performance in assembly polls, settled for eight and has been left with 12 members in the cabinet.

As per norms, the state cabinet can have up to 36 members including the chief minister. With the expansion its strength has risen to 34.

One member each was inducted from the quotas of smaller allies Hindustani Awam Morcha and Vikassheel Insaan Party (VIP) when the cabinet was formed in November last.

Nabin, a former Bharatiya Janata Yuva Morcha state chief who is representing Bankipur seat in Patna for the fourth consecutive term,has been given important road construction portfolio, held in the previous government by his senior party colleague Nand Kishore Yadav who has been dropped this time in line with a perceived generational shift in the state BJP.

Nabin had defeated Congress candidate Luv Sinha, son of actor-politician Shatrughan Sinha in the recent state polls.   The JD(U) gave preference to experienced hands though there were also a handful of debutants, including Zama Khan who got elected on a BSP ticket but joined the party recently, and Independent MLA Sumit Singh who has pledged full support to the chief minister.   Khan has been, predictably, given minority affairs portfolio while Singh, the scion of an influential political family in Jamui district, has been allocated science and technology.

Others from the JD(U) who took oath included Sanjay Jha and Shravan Kumar, both known to be trusted aides of the chief minister who held key portfolios in the previous government.

Jha has returned as the minister for water resources who shall hold the additional charge of Information and Public Relations Department.

Shravan Kumar, who belongs to the same district and caste as the chief minister, has got rural development, one of the many important portfolios he held in the previous government.

JD(U) leaders Madan Sahni and Lesi Singh also returned as ministers. Sunil Kumar, a former IPS officer who joined the JD(U) last year shortly after retiring from DG rank, has been made minister for prohibition and excise.

He will be expected to make use of his administrative skills to effectively enforce the ban on liquor announced six years ago.

Jayant Raj, a 35-year-old who is among the youngest party MLAs, has got rural works department.

Lesi Singhs induction has raised the number of women in the cabinet to three. Earlier, BJPs Renu Devi and JD(U)s Sheela Mandal had been sworn in and the former was elevated as a Deputy CM.

The NDA had been facing flak from the opposition over the absence of a Muslim in the cabinet. With the induction of Hussain and Khan, it now has ammunition in its armour to counter the charge.

Hours after swearing-in of the new ministers, a meeting of the state cabinet chaired by the chief minister took place here in which six proposals of different departments were approved.