I am telling you coronavirus will go away by March without using vaccines, she said 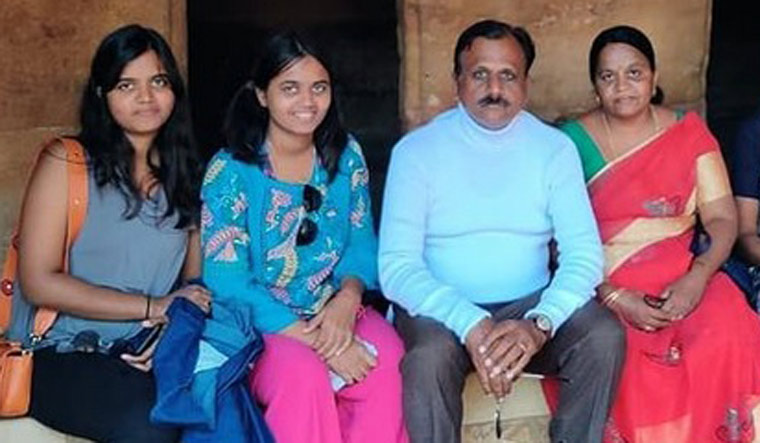 Padmaja Naidu, arrested in connection with the murder of her daughters Alekhya (27) and Sai Divya (23) in Andhra Pradesh reportedly claimed that she is Lord Shiva and Coronavirus came from her body and not from China, while she was being led to the prison.

The two girls were killed by their parents V. Purushottam Naidu and his wife Padmaja in what is being seen as a case of superstition-related murder.

The police arrested the couple who killed their children believing they would come alive after cleansing evil in their bodies. Even as the police was carrying out a search of the premises of their home, Purushottam Naidu told them, "I am not an idiot...I am a PhD." The couple also told the police that they "got certain messages that we must carry this out.''

Purushottam Naidu, who has a doctorate in science worked as an associate professor in the Government Women's Degree College in Madanapalle. He was also the college vice principal, while Padmaja, a post-graduate and gold medalist in maths, was correspondent and principal of a local private school.

In videos that are being circulated, the woman is heard saying, "I am telling you coronavirus will go away by March without using vaccines.'' When her husband tried to calm her down, she told him, "Right now, you are not my husband. I am Shiva."

She had also shouted at her husband saying, "Why could you not have waited half an hour? If you had kept your faith, our girls would have come alive,'' in the presence of police.

Incidentally, the man himself was said to have called one of his colleagues over the phone soon after the incident on Sunday night and disclosed the killings.

The shocked colleague immediately tipped off the police, who rushed to the couple's house and found them in a trance.

"The couple was coherent in their versions as to why they killed their daughters. They may be having some mental issues but they are highly superstitious and highly spiritual," Chittoor SP Senthil Kumar said on Wednesday.

Police sources said the couple had actually planned to kill themselves as well to prove that they would come back alive but the timely entry of police personnel averted the possible suicide.

According to The Hindu, Deputy SP A. Ravi Manohar Achari said the couple told the police that the daughters were unwell for some time and had told their parents that they were seeing strange figures in their house. The accused claimed that it was the younger daughter who forced them to kill her and had threatened to die by suicide if they did not carry out her wish. The girl was brutally murdered on Sunday afternoon and a few hours later, the elder daughter too asked her parents to kill her, arguing that her death would cause the resurrection her her sister.

Aleikhya was doing her post- graduation in Bhopal while the youngest was a ward in the KM Music Conservatory of composer A.R. Rahman.