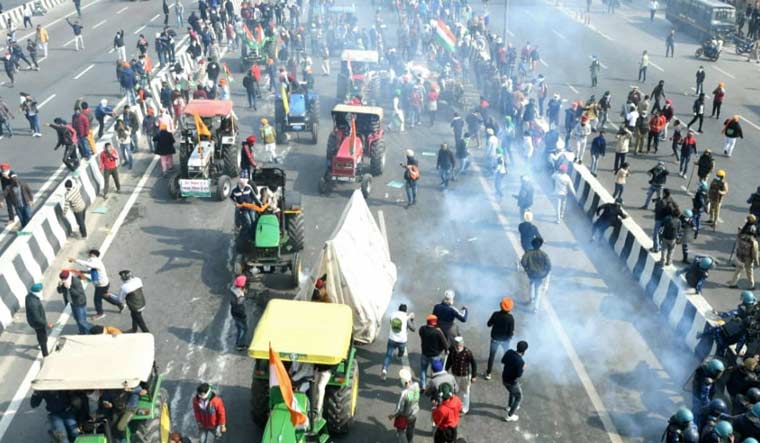 Opposition leaders expressed shock over the unexpected turn of events today as protesting farmers breached security arrangements to reach the heart of the national capital and incidents of clashes between the protesters and the police were witnessed at various points.

In a nuanced reaction, former Congress President Rahul Gandhi said violence is not a solution to any problem. In the backdrop of scenes of clashes between the police and farmers in various parts of Delhi getting beamed on television, Gandhi tweeted, “Whoever gets wounded, it is the country that bears the brunt. In the interest of the country, take back the anti-farmer laws.”

The balanced view expressed by Gandhi was apparently aimed at criticising the Centre and at the same time not appearing to condone the decision by a section of the farmers to deviate from the pre-agreed plan and route for the tractor rally and head towards central Delhi.

Gandhi's party colleague Abhishek Singhvi was more direct in criticising the Narendra Modi government's handling of the situation. He described the developments as “sheer anarchy, utter lawlessness, and an absolute mess!”

He said, “This government defines efficiency, mismanagement, and transgression. The government has taught the world how to turn a peaceful protest into a mobocracy.”

CPI(M) General Secretary Sitaram Yechury was critical of the Centre, saying it was provoking a confrontation. He said tear-gassing and lathi-charging farmers was unacceptable. “Why, after the Delhi Police and Samyukt Kisan Morcha agreement? Why is the government provoking a confrontation? They must allow the peaceful, agreed tractor parade to continue.”

Senior lawyer Prashant Bhushan, who is also a leader of Swaraj Abhiyan, an organisation actively involved in the farmers' agitation, said it was unfortunate that some farmers on tractors had

deviated from the pre-agreed and designated route. “It is extremely important for the farmers to go back to the designated route and above all remain totally non-violent. Any indiscipline or violence will seriously damage the movement,” he said, voicing the feeling that the scenes of chaos and violence would result in the farmers losing public sympathy.