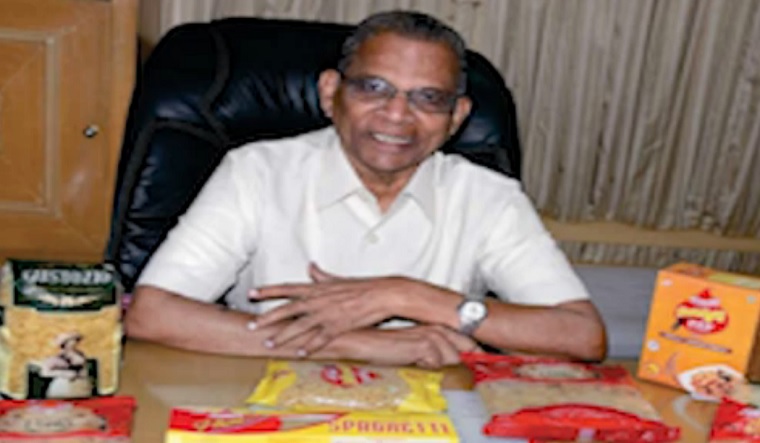 The man who made vermicelli an essential item in Indian households passed away on Wednesday. Myadam Kishan Rao, 83, was the founder of Hyderabad-based Bambino Agrotech Industries Limited. Rao started the company in 1982 after a visit to a technology fair in Germany. Over the years, Bambino became synonymous with different varieties of vermicelli and payasam mix.

“With utmost grief, we regret to inform the sad demise of Shri. Madam Kishan Rao, Chairman and Managing Director of the Company on 12 January 2021. Late Shri Myadam Kishan Rao was the Founder promoter of the company who spearheaded and pioneered the vermicelli industry in India,” read the company’s announcement.

Over the years, Rao has been credited with introducing vermicelli to the middle class families across  the country. During its three-and-a-half decades journey, the company has come out with a range of processed and packaged food products like macaroni, sphagetti, pasta, flour, spice powders and not to forget, instant food mixes like kheer or payasam. The company’s first plant had come up in Bibnagar, close to Hyderabad city. One of the first products from its stable and still the popular is roasted vermicelli.

Currently, the company has more than 600 employees and production plants located in Indore and Gurgaon.

Myadam, who is considered a visionary in the food industry, was known to be simple and sharp. Within the business circles, the Myadam family is known to keep a low-profile and unknown for holding large publicity events.

The company, which exports its products to Japan, USA, Australia and Middle East, is a public listed company. Its single share is more than Rs 200 in Bombay Stock Exchange (BSE).

According to the Annual report of 2019-20, the company’s turnover was Rs 252 crore and the net profit was 8 crore. The company had also imported a pasta plant last year to expand its production.

Prior to setting up Bambino, Kishan Rao was engaged in the manufacture of tobacco products. He was the director of Revathi Tobacco Company Private Limited.