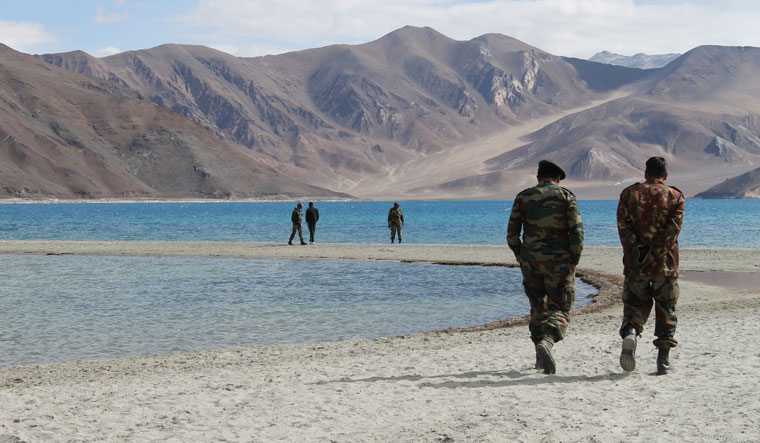 Ever since the first reports of Chinese transgressions into Ladakh emerged in early May, experts had been warning India was staring at a formidable security threat.

The fatal clash in Galwan that left 20 Indian soldiers dead and the subsequent troop buildup in the region had led to fears that the LAC could become an 'active' security zone for Indian security forces like the LOC has been.

The fact that India and China have not made much progress in disengagement talks means the standoff in Ladakh could continue into the New Year. Unlike periods of tension with Pakistan—such as during Operation Parakram that followed the attack on Parliament in 2001—the trajectory of the Ladakh standoff is hard to predict given China's strategic heft and goals and motivations. China's strategic ties with Pakistan, by means of the China-Pakistan Economic Corridor, have been linked to the current standoff in Ladakh by some analysts, given Ladakh's proximity to Pakistan-occupied Kashmir. Beijing has committed to investments of over $60 billion in Pakistan as part of CPEC to develop infrastructure in Pakistan to make the country a hub for Chinese imports and exports.

To make sense of the direction where the India-China standoff is heading, THE WEEK reached out to two eminent strategic commentators: Bharat Karnad and retired Lt general Vinod Bhatia.

Why have attempts at resolving the Ladakh standoff not yielded results?

Karnad: Because of two contrasting negotiating styles. The Narendra Modi government is in a hurry for a final solution of the border issue and willing to compromise. The Chinese negotiating style, on the other hand, considers time an ally. So the proceedings are prolonged, its position maintained without compromise or concession, in an attempt to wear out the patience of the adversary in the hope he will fall in eventually with Beijing's demands.

Bhatia: There has been a constant effort by both China and India to resolve the ongoing situation by dialogue at military, diplomatic and political levels. On account of hardened positions, the resolution will be a laborious and lengthy process. Peace and tranquility along the LAC are in the interest of both nations. However, post Galwan, there is a total lack of trust. We should give it time as we have the requisite resilience to ensure an effective response to China's aggressive behaviour.

Is the long-term Chinese plan in Ladakh related to its interests in Pakistan?

Karnad: There are two aspects to this. China wants India to vacate the heights on the Kailash Range around Chushul occupied by Special Frontier Force units while consolidating its hold over Fingers 4 to 8 on the Pangong Tso. Whatever the inducements offered, under no circumstances, should Delhi agree to climb down from the Rezang La ridge and the tops above the Spanggur Gap. The other thing is China's reported revival of the so-called '1959 Line' by firming up its control of the area beyond the Y-Junction. The Chinese objective clearly is to distance the Indian armed forces even more from the Xinjiang Highway, which is China's lifeline to its other western province, the Karakoram Pass and CPEC.

Bhatia: I think we went wrong in discerning China's strategic intent initially. China's forward deployment along the LAC is a part of Chinese ‘military coercion’. China cannot afford any threat to CPEC, as CPEC is central to China's dream One Belt, One Road (OBOR) initiative. China would also like India to endorse this initiative.

How important is the status of Depsang in the event of a resolution of this standoff?

Karnad: The blockade of the Y-Junction on the Depsang Plains is crucial and has to be lifted by India, by forceful means, if necessary. Because by preventing Indian troops from patrolling the Indian-claimed area north and northwest-wards, it pretty much permits that entire 'sub-sector North' in Indian Army's parlance—some 975 sq kms in all—to slip into China's possession.

Bhatia: Depsang is definitely critical to our operational interests as occupation by China threatens the Shyok-DBO-Karakoram road. China will like to play this card to coerce India to seek concessions at other places and, more importantly, threaten Siachen as a collaborative strategy along with Pakistan. However, our occupation of operationally and strategically important heights along the Kailash ridge on the South Bank of Pangong Tso has given India an advantage at the negotiations. India aims at 'status quo' ante as of April 20 and continued peace and tranquility, ensuring equal and mutual security.

Is there a basis for fears of a two-front war against Pakistan and China?

Karnad: Realistically, a two-front war is less of a possibility; the more worrisome thing is the Modi government agreeing to withdraw Indian forces an "equal distance" as part of a "comprehensive" accord. Such an agreement will seriously handicap Indian forward units, because the PLA, availing of a dense network of border roads, will be able quickly to rush and occupy strategic locations presently in Indian hands even as the Indian units struggle, owing to still-thin border infrastructure.

Bhatia: China has always been a long-term threat. Recent China's arrogance and aggressive behaviour now indicate an immediate-to-near-term threat, with the probability of manifesting as a China-Pakistan collaborative threat in the conventional (warfare) domain. India will need to ensure peace through military preparedness. A two-front war is a reality. India should also look at like-minded nations to negate the China threat; 'bind to balance’should be a good way forward. India should also reset and refresh its China policy. However, the reset policy should be pro-India and not anti-China, despite the anger and anguish caused by China's betrayal yet again.

How much will US policy change with respect to India once a Biden administration takes over?

Karnad: There will be changes. The Biden administration, unlike the Trump dispensation, will emphasise human rights issues: Kashmir, Hindu-Muslim tensions and other social issues. This will alienate the Modi government and likely poison India-US relations enough to make uncertain such US assistance as Delhi would have otherwise relied on in a confrontation and crisis involving China.

Bhatia: The Biden administration's policy too will be dictated by US interests. There are a congruence and convergence of interests of India and the US, especially where China is concerned. In a post-COVID-19 world order, India will be a global leader and hence the US will need India as the 'balancing power' as the balance of power shifts from West to East.