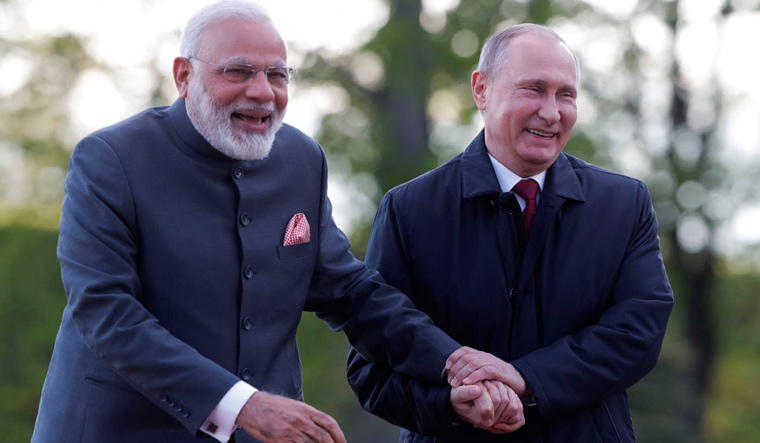 “As friends of both India and China, we welcome dialogue between the two, which is the only key to the progress of ties and to security,” said Russia’s envoy to India Nikolay Kudashev, during his annual press conference on Monday. He noted that it was a sign of Russia’s trusted partnership that India’s Defence Minister Rajnath Singh and External Affairs Minister S. Jaishankar had had “profitable negotiations” with their Chinese counterparts on Russian soil this year, on the sidelines of the Shanghai Cooperation Organisation (SCO) meet. He termed these bilateral talks as very significant to constructive engagement.

“Russia is a trusted partner for India and China and we feel it is vital to ensure a positive atmosphere for cooperation between the two neighbouring Asian giants, including at the platform of the SCO, BRICS and RIC,” he said.

The envoy noted that this year marked the 20th anniversary of the India-Russia strategic partnership and the 10th anniversary of elevating the ties to a special and privileged partnership. Though leaders Vladimir Putin and Narendra Modi interacted over four telephone conversations and met virtually over two G20 summits and the BRICS and SCO summits, the annual bilateral summit has been pushed to 2021 because of the pandemic.

Kudashev said that Russia was supportive of India’s growing profile globally, and understood and supported India’s vision of the Indo-Pacific as compliant with international law and inclusive. Roman Babushkin, the deputy chief of mission, however, pointed out that there was no unified version of the Indo-Pacific currently, and many countries are promoting visions and mechanisms, which are non-inclusive, creating some “mixed apprehensions about the intentions”.

Babushkin pointed out that there was no regionwide dialogue on the Indo-Pacific as a concept, on dedicated platforms like the East Asia summit. He noted that some countries were promoting a “so called rules-based order” but “no one can clearly tell what does rules-based order mean”. He said some countries were creating a “containment” in the region which jeopardises regional cooperation, ASEAN centrality.

“Quad will be detrimental to inclusive dialogue on the region,” he asserted. Russia, on the other hand, offers as “unifying agenda of Eurasian partnership that brings all visions together.”

Russia made a bid this year for an observer status in the Indian Ocean Rim Organisation because “we feel we should be part of the changes and can contribute lots to IORA’s scope—maritime security and connectivity.” Russia’s bid was turned down, but the envoy said they hope for a better chance next year under the chairmanship of Bangladesh.

The Russian team noted that bilateral relations stayed strong and cohesive even in a year of global disruption. The ties were wide ranging, on the one hand there was joint cooperation in vaccine production, on the other hand Russia is the only country at present to be involved in India’s nuclear programme, with the nuclear plant at Kudankulam being their flagship project. They were hopeful that the next year would bring further progress in talks to take forward six other joint nuclear plant projects. Kudashev said that in the defence sector the S400 deal was advancing well.

“If relevant decisions to start works related to Ka-226 helicopters and AK -2-3 rifles production are expedited, soon we will see good progress.” At the Aero India 2021 show, Russia intends to be one of the biggest exhibitors, showcasing Su-57, Su-35 and MIG-35 fighter jets, the helicopters Ka-226, Ka-52, Mi-17B-5, Mi-26 as well as S -400 and Buk systems. He was hopeful that the US sanctions would not impede India and Russia’s defence deals, since neither Russia nor India recognised unilaterally imposed sanctions like CAATSA (Countering America’s Adversaries Through Sanctions Act), which the US has just imposed on Turkey.

The envoys noted that they did not see much hope of better times with the new regime in the US under Joe Biden, even though President Putin, in his letter to Biden has given an invitation for dialogue. Babushkin pointed out that in the last four years, attempts to repair the dialogue were blocked domestically. He noted that while the US spoke about a rules-based order, it was threatening even its closest allies with secondary sanctions. He cited the example of the Iran oil supply and Russian military deals. The US has also expanded military presence close to the Russian border and was threatening to come out of the Open Skies Treaty. Babushkin also pointed out that the US nuclear policy allows it to use nuclear weapons even in response to non-nuclear weapon threat.