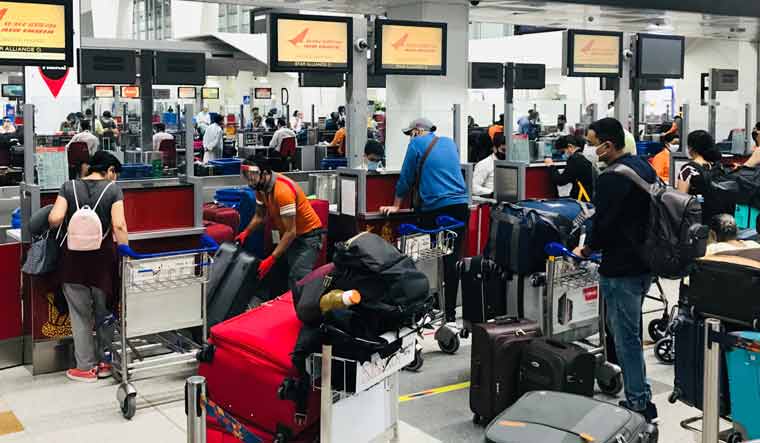 A crowded baggage counter at the Delhi airport | Aayush Goel

Even as the scientific community is studying the implications of the new mutation found in SARS-COv 2 that seems to spread 70 per cent faster, the Union health ministry has said that the virus could pose "critical risks" for India.

"As you are aware, India has been seeing a sustained decline in the number of fresh COVID-19 cases for over two and half months now, accompanied by a decline in the number of deaths. In this scenario, any interjection of a SARS-COV 2 virus through passengers with air travel history could pose critical risks for pandemic management in India," Union Health Secretary Rajesh Bhushan has said in a letter sent to the Union civil aviation ministry.

“A distinct phylogenetic cluster of SARS-COv 2 (named lineage B.1.1.7) has been detected. This SARS-COV 2 is spreading and growing rapidly in the United Kingdom. It has also been reported that this variant has an unusually large number of genetic changes particularly in the spike protein. This development calls for enhanced epidemiological surveillance, enhanced containment and other measures to effectively tackle the challenge," the letter reads.

The letter recommends that all flights originating from UK be suspended temporarily till December 31, 2020. The suspension would come into effect from midnight of December 22. Further, the letter recommends that as a measure of abundant caution, passengers arriving from the UK in all international flights should be subjected to mandatory RT-PCR tests on arrival at the concerned airport. Those who test positive would be sent to for instituinal quarantine /isolation set up by the state governments. Those found negative should be advised to isolate themselves at home for seven days, and medically monitored by states, UTs concerned, the letter reads.

The decision has come after an urgent meeting of the health ministry's joint monitoring group, headed by the director general of health services and the vaccine task force headed by the principal scientific adviser Dr K. VijayRaghavan and Dr V.K. Paul, member, Niti Aayog, was called on the issue.

Assuaging fears over the new strain, Union Health Minister Dr Harsh Vardhan said earlier in the day that as of now, "there is no need to get involved with these imaginary situations, imaginary panic".

"The Centre is alert and there is no need to panic about it,” Vardhan said, speaking at the curtain-raiser for the 6th India International Science Festival-2020 (IISF 2020). “The government is fully conscious about everything. If you ask me, there is no reason to panic the way we are seeing in this press conference,” he told the media.