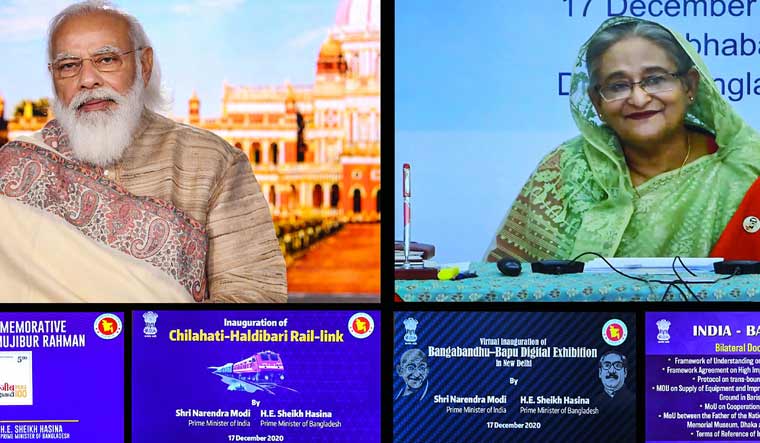 Bangladesh, said Modi, was an important pillar in India's 'Neighbourhood First' policy, and lauded the cooperation between the two countries during the pandemic, by way of supplying medicines and equipment and training of health workers.

Bangladesh enters the golden jubilee celebrations of its nationhood now, and Modi said he marked the occasion by lighting the Golden Victory Torch at the National War Memorial on Wednesday. Four such torches will traverse across the country, reaching the villages of all the soldiers who were martyred during the liberation of Bangladesh. Modi has also been invited to Dhaka to attend the celebrations on March 26, the Bangladesh Independence Day. This year will also mark the golden jubilee of establishment of diplomatic ties between the two nations.

The cooperation with Bangladesh has progressed significantly this year, with Bangladesh opening itself up for facilitation of internal trade in India through its territory. Given India's geography, it is often less time consuming to move through Bangladesh from one Indian location to another, instead of staying on Indian routes. Tripura has been a big beneficiary this year, with the Chattogram port opening up for India's internal trade from Kolkata, as well as an international waterway being inaugurated on Gomati river from Sonamura in Tripura to Daudkandi in Bangladesh some months ago.

On Thursday, the two leaders virtually inaugurated the Chilahati-Haldibari train route for cargo. Later, said joint secretary Bangladesh and Myanmar, Smita Pant, the line could be used for passenger traffic, too.

The seven agreements that were inked on Thursday range from agriculture to cultural cooperation. Three are significant from India's role as leader in climate crisis mitigation—trans-boundary elephant conservation, cooperation in hydrocarbons and the improvement of a garbage solid waste ground at Lamchori area of Barishal City Corporation.

Another significant agreement was on coordinated border management plan and an early fencing of the vulnerable patches to reduce mortality at border skirmishes to zero.

Pant said the leaders spoke about water resources management, and agreed on secretary level meetings under the joint river framework.