'Ready to clear every doubt; the Centre committed to farmers' welfare' 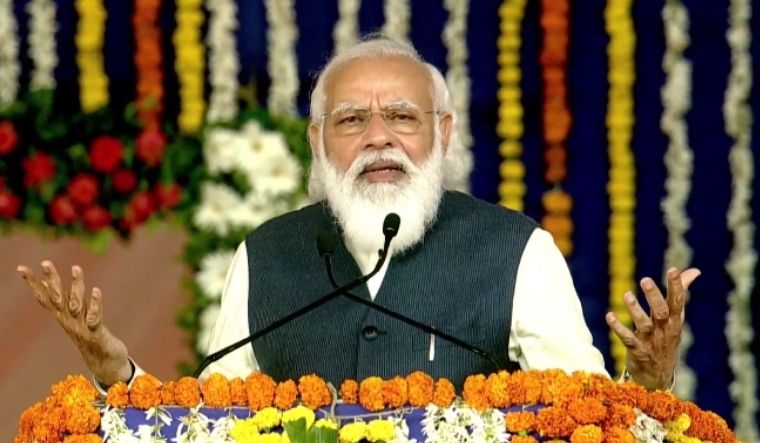 Prime Minister Narendra Modi on Tuesday alleged that an opposition-led conspiracy is going on to mislead farmers regarding the farm laws. "A conspiracy is going on around Delhi to confuse farmers. They are being scared that after the new agri reforms, the land of farmers will be occupied by others. Tell me, if a dairy has a contract of collecting milk from you, do they take away your cattle too?" PM asked in Kutch in Gujarat on Tuesday.

The prime minister added that his government was "ready to clear every doubt that farmers have raised." Farmers' welfare has always remained among our top priorities, the PM added.

"The agriculture reforms that have taken place are exactly what farmer bodies and even opposition have been asking for over the years. The government of India is always committed to farmer welfare and we will keep assuring the farmers and addressing their concerns," he said. "People who are sitting in the opposition and misleading farmers today were in the favour of these farm reforms during their government. They could not make a decision during their rule. Today when the nation has taken a historical step then these people are misleading farmers," Modi said. The prime minister was addressing the people after he laid the foundation stone for the Hybrid Renewable Energy Park in Kutch district of Gujarat.

"People of Kutch turned disappointment into hope... Even a big earthquake couldn't shatter the morale of Kutch residents. Everyone stood up again after the quake and now look where they have taken Kutch. Today Kutch has taken a big step towards new age technology and new age economy," Modi said.

The prime minister added that over the last twenty years, Gujarat introduced many farmer-friendly schemes. Gujarat was among the earliest to work on strengthening solar energy capacities, Modi said.

"A Clean Energy Investment Ranking came out recently; 114 countries appear in this ranking and India features in the top three countries. Now, India is showing a path to the entire world and leading it, in the fight against climate change," he added.

The prime minister, who is on a one-day visit to Kutch, will lay the foundation stones for several projects and interact with farmers and artisans from the tent city of Dhordo in the district.