THE WEEK ARCHIVES: When Athar met Tina Dabi, it was love at first sight 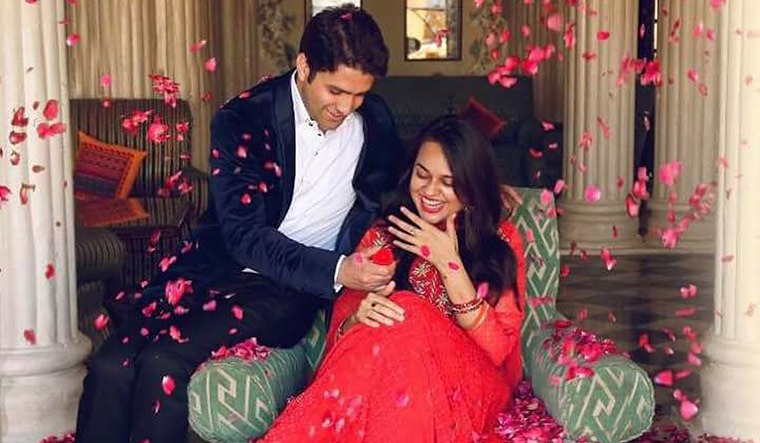 This story originally appeared in the December 22, 2018 issue of THE WEEK.

THEIR LOVE BLOOMED in a sarkari setting.

Cupid struck while Tina Dabi and Athar Aamir-ul-Shafi Khan were attending a felicitation function of the department of personnel and training in North Block, New Delhi.

The IAS couple was already in the news—Tina, for being the first dalit to top the Union Public Service Commission exams in 2015, and Athar, who came in second, because of his Kashmiri roots. A graduate of Delhi’s Lady Shri Ram College, Tina cleared the UPSC exams in her first attempt, while Athar did so in his second attempt.

It was love at first sight for Athar at the DoPT event in May 2016. “We met in the morning, and by evening Aamir was at my door,” said Tina. She, however, took a few months to say yes. It was his perseverance and charming personality that attracted her to him, she said.

From then on, it was a whirlwind romance for the couple, who were allotted the Rajasthan cadre (Tina is assistant secretary, ministry of micro, small and medium enterprises; Athar is assistant secretary, tourism ministry). And, they were quite open about it. Tina’s Instagram account has photographs of them travelling to different places, from Jaisalmer to Paris. She got Athar’s name tattooed on her hand and posted a picture of it. She also posted Athar’s Valentine’s Day message, which read: “I don’t know what to call you—my life or my world. You mean everything to me. You are my reason to be happy. You make me soar....”

And, all hell broke loose as their religions or rather their differences took centre stage. Trolls came rolling, and allegations of ‘love jihad’ soon followed. In a letter addressed to Tina’s father, Hindu Mahasabha’s national secretary Munna Kumar Sharma said that they should refrain from promoting ‘love jihad’. It went on to suggest that if the family wanted to go ahead with the wedding, they should persuade Athar to “re-convert” to Hindu religion. “Hindu Mahasabha will extend full support to the family in performing ghar wapsi of Athar Khan,” read the letter, which was published on the Mahasabha’s site.

Despite all this, Tina and Athar continued courting. Tina, as a freethinking, independent woman, was firm about her right to choose her partner. The couple, quite in a new-age fashion, announced their wedding on Twitter. They had a court marriage in Jaipur, followed by a reception, hosted by the groom’s family, at the picturesque Pahalgam, their hometown. The reception was a low-key affair, quite unlike the high-profile event hosted in Delhi by Tina’s parents (Tina’s mother is from Madhya Pradesh and father from Rajasthan; both are employed in the Indian Engineering Services). The post-wedding event was attended by bureaucrats and politicians like Vice President Venkaiah Naidu, Lok Sabha Speaker Sumitra Mahajan and Union Minister Ravi Shankar Prasad. Congress president Rahul Gandhi, too, posted a congratulatory tweet: “May your love grow from strength to strength and may you be an inspiration to all Indians in this age of growing intolerance and communal hatred. God bless you.”

As they say, love conquers all.