Indian army has deployed over 50,000 troops in the sector 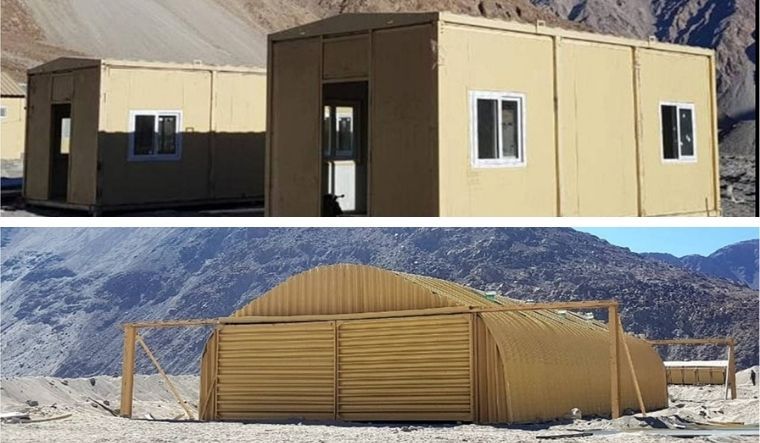 As the military standoff between Indian and Chinese troops continues on the icy heights of eastern Ladakh, Indian Army has completed establishment of habitat facilities to protect its soldiers on the Line of Actual Control (LAC).

According to official sources, troops on the front line are accommodated in heated tents as per tactical considerations of their deployment as temperature in eastern Ladakh dips to minus 30-40°c coupled with wind chill factor.

Since April, both Indian and Chinese sides have amassed large number of troops in eastern Ladakh. Indian army has deployed over 50,000 troops in the sector which is nearly four times the usual deployment in the area. It was estimated that around 10,000-12,000 assorted habitats would be required for the troops, including arctic tents to accommodate three to four people. Besides, two types of fibreglass huts that can house four to six troops and another with a capacity of eight to 10 people. In addition, prefabricated shelters to house around 20 people as well as stores were also made available apart from bathing cubicles and kitchen.

"Before the onset of snowfall, we have completed establishment of habitat facilities for all troops deployed in Eastern Ladakh. Apart from smart camps with integrated facilities built over the years, additional state of the art habitat with integrated arrangements for electricity, water, heating facilities, health and hygiene have been recently created to accommodate the troops," a defence official said.

The official maintained that adequate civil infrastructure has also been identified to cater for any emergent requirements in eastern Ladakh since road access also gets affected for a brief period of time in this region.

It is believed that military leadership of both countries are working out a phase-wise disengagement plan. In the last military commander's meeting on November 6, some points were shared by both sides to find a way out of the six-month-long standoff.

Recently, Army Chief General MM Naravane claimed that the situation as of now is quite stable on the border. He said both sides are engaged in talks, and these talks are as per the overarching guidance and guidelines which have been achieved in the talks held between the respective defence and foreign ministers.

While talking about the 8th round of military level commanders on both sides, General Naravane said that they are ironing out the modalities of how to proceed ahead within the overarching guidelines which had been communication post the interactions and the meetings between the respective Ministers.

Now, both sides are waiting for the next round of military commanders meeting, expected to happen soon.

Though experts believe that Indian military has an edge over Chinese in terms of facing hostile weather conditions as Indian army has been guarding the Siachin glaciers-the world's highest battlefield- for several years. Chinese PLA generally camp in the plateau.

Last week, General Naravane said that the troops deployed on the LAC are equipped with all latest and newest winter clothing, equipment and weapon they are required to have. And the Indian army had to go for emergency procurement to cater for the additional troops on the border.

Military strategists believe that China is getting jittery because it is not on the upper side when it comes to having tactical gains. Indian army launched its "Operation Snow Leopard" on August 29, when Indian troops launched an offensive posturing by taking control of dominating heights in the Chushul region. By gaining control of dominating heights, India can overlook Chinese Moldo Garrison. India military has occupied some strategic heights - Magar Hill, Gurung Hill, Gorkha Hill and Reqin La, and are within their side of the LAC and that it needs to maintain troops there to protect its territory. And pulling back from freshly occupied heights will be a strategic disaster for India.