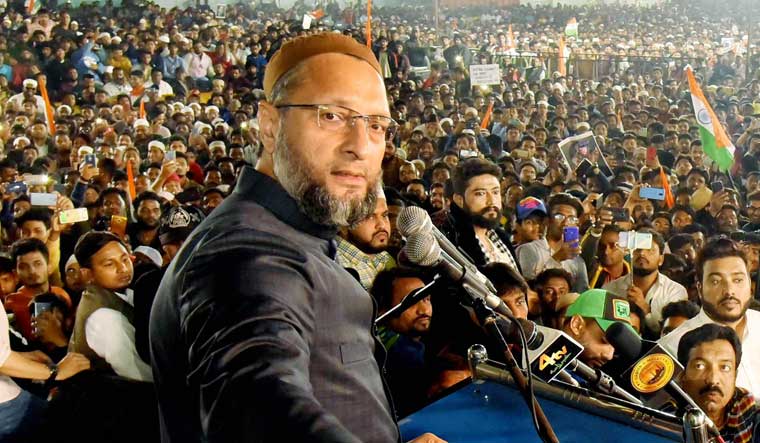 Twelve hours into counting of votes in Bihar, the difference between the ruling NDA and the Grand Alliance was dramatically close. The difference between the two alliances was the performance of the third front in the state. Asaduddin Owaisi-led AIMIM, which won one seat in the 2019 by-polls, improved its tally to five (winning in one, leading in four others). Its alliance partner BSP was leading in one seat.

This improved show by AIMIM signalled the polarisation in the minority-dominated Seemanchal region of the state where the Muslims chose the new entrant over RJD and the Congress. The RJD, which prided in MY (Muslim-Yadav) formula, appeared to fall behind in triangular fight in the seats where AIMIM won. Owaisi's party had fielded candidates on 20 seats, of which majority were in the Seemanchal region of the state.

When Owaisi entered into the fray in 2015, he was decried as vote divider who would help the BJP. The Muslims sided with the JDU-RJD then. But this time, in absence of Lalu Prasad Yadav in the poll scene, the RJD apparently could not convince the Muslims to stay with it. In all the five seats where AIMIM has performed well, its main rivals were the NDA candidates, relegating the Grand Alliance to third place. The AIMIM appears to have played a spoiler in their plan to get majority.

AIMIM's good show is likely to make the party contest the West Bengal polls with confidence.

The only solace the Grand Alliance can draw from the result is that AIMIM would support the Tejashwi Yadav-led grouping than the BJP-led NDA.

Owaisi also gained by strategically aligning with the other caste parties like the RLSP, BSP and Samajwadi Janata Party. The party gained by polling more votes. This alliance, apart from the one led by Pappu Yadav, ate into the Grand Alliance votes, thus hurting them.

The new state assembly will witness much politically diverse members. Adding strength to their numbers apart from the main parties like the BJP, JDU, RJD and Congress, would be the Left parties as they were leading in 18 seats, and AIMIM.