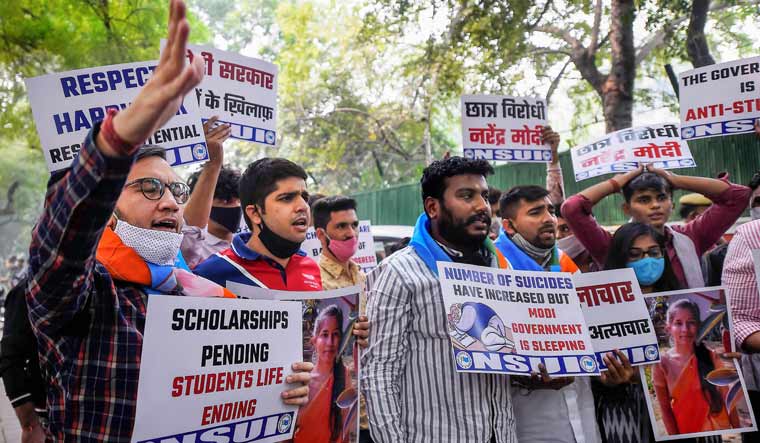 Poverty raised its ugly head claiming a bright life near one of the most advanced and cosmopolitan cities in the country. Aishwarya Reddy, 19, a student of Lady Sriram College in Delhi committed suicide last week at her home in Shadnagar, 50 km from Hyderabad. The student, who was pursuing Bachelors with a major in Maths, was distraught because of lack of financial resources, going by the hand-written note left by her.

“Nobody is responsible for my death. Expenses have increased for my family because of me. I have become a burden to them, my studies have become a burden to them. I cannot live without studying. I have been thinking for the last few days and I feel death is correct for me. My death may trigger some speculation but I have done no wrong. Please make sure that Inspire scholarship is received at least for an year. Forgive me, everyone. I am not a good daughter,” read her suicide note.

Aishwarya’s father, Srinivas Reddy, is a mechanic and her mother, Sumathi is a tailor. According to local police officials, Aishwarya was found hanging on November 2 in one of the rooms of her house. She had returned to her house from Delhi during lockdown and was desperate to have a laptop or a smart phone to access online classes, but in vain.

Speaking to the media after the tragedy, which got national attention only this week, Srinivas Reddy said that he had not only mortgaged his house but also made his younger daughter quit studies so that all the resources could be used for Aishwarya’s education.

“She badly wanted a laptop as all she could think of was studies,” said Srinivas Reddy. “The phone we had was not in a good condition. She asked me to help her but I said I don’t have the money. She tried every possible way to get these devices.”

Her father informed that she had even tweeted to actor Sonu Sood with the hope that he would help her with a laptop. The depleting income of the family during the last few months of lockdown only made their condition worse.

The grieving family says that Aishwarya was a topper since childhood, bagging state second rank in intermediate, and wanted to be an IAS officer. The heartbroken father kept repeating to the media that they had no inkling that she would take the extreme step. They also said that they were quite happy when she got into Lady Sriram college as it was a prestigious institution and wanted her to complete her course at any cost.

Her friends are still in disbelief that Aishwarya is no more.

“She was jovial and very strong-minded. In fact, she would counsel me and other friends on how not to worry when faced with problems,” said K. Varshini, a close friend of Aishwarya who is also from Telangana and studying in Lady Sriram college.

“I stayed at her place for nine days last month and she came and stayed at my place a day before she committed suicide. It is hard for me to accept that she hanged herself. I knew she had financial difficulties and we also discussed on how to resolve it. My mother told her that she can even arrange a loan. The day she committed suicide she was crying and was upset for some reason. I even told her that I can get her to my place.”

According to Varshini, she never spoke of taking her life or displayed suicidal tendencies.

The suicide also led to a churn in the campus of Lady Sriram college as the Students Union organised a protest on Monday.

Unnimaya, general secretary of Students Union, said that Aishwarya’s death was an “institutional murder”. She said that Aishwarya was under stress because the college management had asked her and others to shift from hostel in-line with a new rule of providing accommodation only for first year students.

“She had to mobilise around Rs 30,000 to 40,000 to travel all the way to Delhi and shift to a new accommodation. As a result she was under stress and her mother also mentioned it,” Unnimaya said.

The students' body also pointed out that the digital divide was wide and they had demanded laptop or gadgets to poor students who could not afford it. “We conducted a survey and Aishwarya wrote that she does not have a laptop and she is not able to do practical,” said Unnimaya.

Aishwarya was a recipient of the INSPIRE (Innovation in Science Pursuit for Inspired Research)  scholarship of the Ministry of Science and Technology and eligible for Rs 80,000 per year. The protesting students in the campus also criticised the college management for not easing the process of availing the scholarship this year, thus denying the amount to students like Aishwarya. Members of the Students Federation of India (SFI) held protests in Hyderabad and blamed the Centre for delaying scholarships leading to a spike in student suicides.