If the grand alliance wins, it will again usher in an 'era of violence', says PM 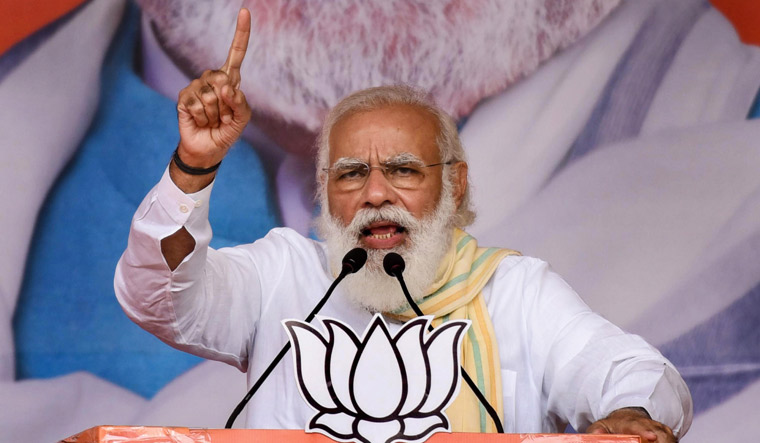 Proponents of the jungle raj are concerned only about protecting benami wealth, Prime Minister Narendra Modi said in Bihar on Sunday, in an apparent reference to the money laundering cases against RJD chief Lalu Prasad Yadav and his family.

Addressing an election rally in Motihari, Modi launched a scathing attack on the grand alliance, which comprises the RJD and the Congress, and urged the people of the state to be aware that if the grand alliance wins, it will again usher in an "era of violence".

"This time for Bihar elections, leaders of jungle raj have come together with the supporters of Naxalism and tukde-tukde gang. If given a chance, they will again push the state of Bihar into the dark era of violence. Therefore, people of Bihar have to be aware of them," he said

"If those jungle raj leaders had ever been worried about you, then Bihar would not have lagged behind in the race of development. The truth is they neither cared for you before nor do they care about you now. They are only worried about hiding their benami property," he said.

Modi said the opposition was only creating an atmosphere of fear and confusion. “They spread rumours that the NDA will scrap SC, ST quotas and indulged in scare-mongering over Article 370,” he said.

He also attacked the opposition over the Citizenship Amendment Act. “Opposition peddled lie that the CAA will rob many countrymen of their citizenship; not a single person has suffered on account of the new law,” he said.

Earlier, addressing and election rally in Chapra, Modi excoriated the opposition over the Pulwama attack after Pakistan's admission of complicity in it, saying it has "taken masks off" the faces of those in India who never cared for the "sons of Bihar" who lost their lives in the assault.

He also sought to appeal to Bihari sensitivities by speaking about 'chhath' puja, saying their "son" will ensure that kitchen fires are kept burning despite the COVID pandemic.

Meanwhile, addressing another rally in Samastipur, Modi said on one side of the political divide was the NDA which was committed to democracy and on the other an alliance devoted to dynastic politics.