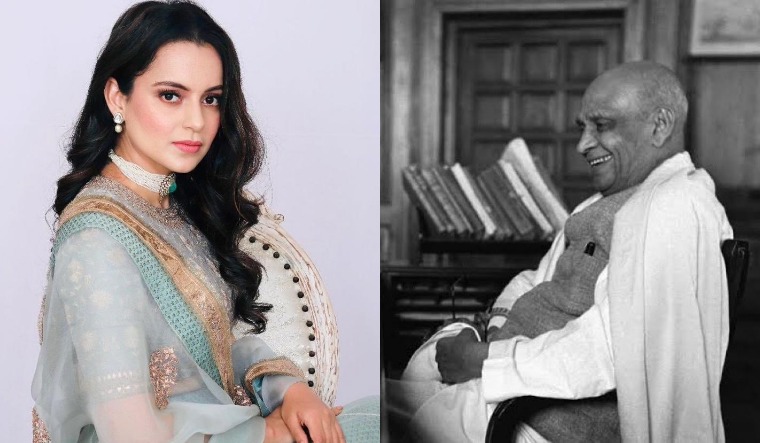 Actor Kangana Ranaut has not been shy of expressing her opinion on politically sensitive topics for several months now.

So, it is no surprise that she tweeted on a very old point of debate in Indian political lore: Who did Mahatma Gandhi want as the first prime minister of India?

He sacrificed his most deserving and elected position as the First Prime Minister of India just to please Gandhi because he felt Nehru spoke better English, #SardarVallabhbhaiPatel did not suffer but Nation suffered for decades,we must shamelessly snatch what is rightfully ours. pic.twitter.com/TGxcOlDB3K

In a series of tweets on Saturday to mark the 145th birth anniversary of Sardar Vallabhbhai Patel, the first home minister of India, Kangana claimed Patel had "sacrificed" the chance to become prime minister.

Kangana wrote, "He [Sardar Patel] sacrificed his most deserving and elected position as the first prime minister of India just to please Gandhi because he felt [Pandit Jawaharlal] Nehru spoke better English, #SardarVallabhbhaiPatel did not suffer but Nation suffered for decades,we must shamelessly snatch what is rightfully ours."

Kangana alleged Mahatma Gandhi had orchestrated the appointment of Pandit Jawaharlal Nehru as the first prime minister as he had a "weaker mind". "He [Patel] is the real Iron Man of India, I do believe Gandhi ji wanted a weaker mind like Nehru that he could control and run the nation by keeping him in the forefront, that was a good plan but what happened after Gandhi got killed was a big disaster," Kangana wrote.

|"Wishing India’s Iron man #SardarVallabhbhaiPatel a happy anniversary, you are the man who gave us today’s akhand Bharat but you took your great leadership and vision away from us by sacrificing your position as a Prime Minister. We deeply regret your decision," Kangana added.

Kangana Ranaut's tweets echo a sentiment that many rightwing groups and BJP leaders have held about Sardar Patel. A plethora of BJP leaders have made the claim the country would have taken a different path if Sardar Patel was the first prime minister. In February 2018, Prime Minister Narendra Modi told the Lok Sabha, “Had Sardar Vallabhbhai Patel been the first prime minister, a part of Kashmir would not have been under control of Pakistan.” The critics of Nehru and his successors in the Nehru-Gandhi family allege that Sardar Patel's legacy had been ignored by successive Congress governments.