"His life was devoted towards the progress of Gujarat," Modi said 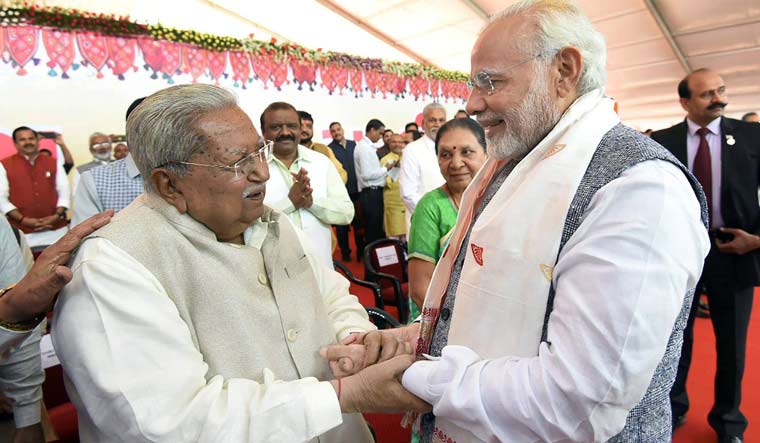 For the BJP in Gujarat, an era came to an end on Thursday with the passing away of former chief minister and party stalwart Keshubhai Patel. He was 93.

Chairman of the Somnath Trust, he had recently recovered from COVID-19. He was admitted to a private hospital on Thursday morning following breathing problems. Preliminary reports suggest that he died of cardiac arrest.

Condolences have started pouring in from Gujarat and other states, cutting across party lines. Gujarat Chief Minister Vijay Rupani and state BJP president C.R. Patil have cut short their visits to different districts and are headed towards Gandhinagar. By-elections to eight assembly seats are scheduled in November.

Prime Minister Narendra Modi took to Twitter and said, “Our beloved and respected Keshubhai has passed away.. I am deeply pained and saddened. He was an outstanding leader who cared for every section of society. His life was devoted towards the progress of Gujarat and the empowerment of every Gujarati.”

Sharing his old photograph with Patel, Modi also tweeted that Keshubhai travelled across the length and breadth of Gujarat to strengthen the Jana Sangh and BJP. He resisted the Emergency tooth and nail, Modi said, adding that issues of farmer welfare were closest to his heart.

Patel, fondly called Keshubapa by one and all, is credited for the foundation of the BJP in the state along with veteran leader Shankersinh Vaghela and late BJP leader Kashiram Rana.

He represented Gujarat in the Lok Sabha and Rajya Sabha also. He was MLA from 1978 and 1995.

Majority of the current senior BJP leaders were groomed under Patel and Rana.

Patel is credited of several things, including development of a good road network in the state, including remote areas, which was later on capitalised by Modi when he became the chief minister in 2001.

While he saw many ups in his long political career, he suffered several setbacks also. In 1995, he had to resign as the chief minister following a rebellion by Vaghela, who was then with the BJP. Vaghela was miffed with apparent “backseat driving” by Modi of the Patel government. Modi was then a key member of Gujarat’s BJP’s state unit.

As a stop gap arrangement, Suresh Mehta was made the chief minister.

In 2001, an earthquake rocked Gujarat. The state suffered loss of lives and property. There were allegations that the rehabilitation was not up to the mark. Later in the year, the BJP lost a seat in a by-poll. In October 2001, Modi, who had not contested a single election till then, was brought to Gujarat and Patel, who was the chief minister, was replaced.

The grapevine is that Modi had insisted before veteran leader L.K .Advani that he be sent back to Gujarat. He was given other posts in the party, outside Gujarat, after the rebellion of 1995.

Patel continued to be with the BJP even after he stepped down as the chief minister. However, he had several issues with how the party and the government functioned and eventually in August 2012, he left the BJP and formed Gujarat Parivartan Party (GPP).

The GPP did win a couple of assembly seats but could not go beyond. Eventually, the party was merged with the BJP in a couple of years.

Gordhan Jhadafiya, one of his close associates, holds a key post in the BJP’s Gujarat unit.