The PDP chief lambasts Centre in her first presser after release 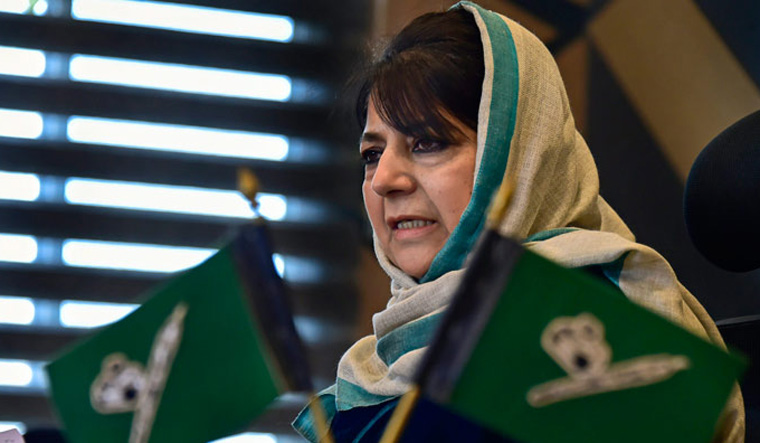 PDP president and former chief minister Mehbooba Mufti on Friday said she won’t participate in any elections or raise the national flag until the flag and Constitution of Jammu and Kashmir are returned.

Last year Mufti had warned that if Article 35 and Article 370 were removed, nobody in Jammu and Kashmir would raise the national flag.

She said their fight is not just for the restoration of Article 370 but for the resolution of the Kashmir issue.

“Those who snatched Article 370 and 35A from us had no powers to do so,’’ Mufti said on Friday at a crowded press conference—her first after she was released from detention after 14 months on October 14—at her residence in Srinagar.

She said those powers were given by the Indian Constitution to J&K’s Constituent Assembly which has decided it should stay.

“I want to assure my people that anything that is stolen by the dacoits will not remain with them for long,’’ she said.

Mufti said last August she had requested NC patron Farooq Abdullah to call a meeting of all parties after feeling some mischief was going to happen .

After Farooq was summoned to Chandigarh by the Enforcement Directorate for questioning, she called a meeting at her house. “Then we met at Farooq Sahab’s house and agreed on Gupkar Declaration,’’ Mufti said.

She said no matter how hard the BJP tries to discredit the mainstream through fake TRP media, they will not relent.

The BJP has ripped the Constitution apart and the opposition parties except a few are quiet, Mufti said, adding that the saffron party has polarised the country with CAA while farmers and the downtrodden are also suffering.

“They want to replace the Constitution of this country with the BJP manifesto,’’ she said.

“I  want to tell those sitting in Delhi Darbar that Kashmir is an issue. You can’t shut your eyes to the reality,” said the former chief minister.

Terming the rise of the BJP as a storm, she said her father had formed a coalition with the BJP because he had sensed that storm had come to the country and it was not about one election victory alone.

She said those who believe the people of Jammu and Kashmir will forget what had happened are day dreaming.

“Thousands have sacrificed their lives in Kashmir for the Kashmir issue and we will not let those sacrifices go waste,’’ she said.

“People have shed their blood for the Kashmir issue. Now it is time for leaders like us to give their blood,’’ she said. “We don’t want violence, but they want it.”

Mufti said since the abrogation of Article 370, the Centre has introduced several laws to provoke people in Kashmir like the  domicile law, law against Urdu as an official language and for sidelining Muslim officers in the government.

“People of J&K are expendable for them,’’ she said.

She demanded that the Centre allow them to use the flag of Jammu and Kashmir. “Only when this flag is given back, I will pick up the national flag.”

Asked if the PDP’s alliance with the BJP was also responsible for the removal of Article 370, Mufti said the revocation was done by the Parliament not the assembly.

“They misused the Parliament and desecrated the Constitution,’’ she said. “The Parliament had no right to do it.”

The PDP chief said they have formed an alliance, the People’s Alliance for Gupkar Declaration (PAGD), and everything will be discussed by party workers and with the members of the PAGD and whatever decision is taken will apply to all.