On his 84th birthday, Farooq Abdullah summoned by ED for second time in 3 days 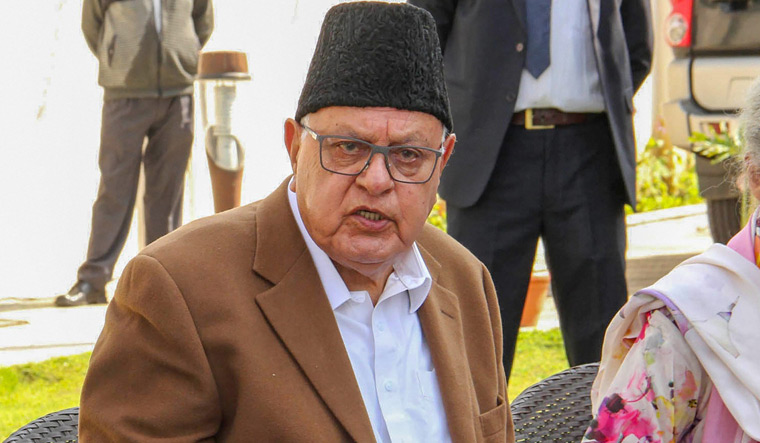 National conference President and MP Farooq Abdullah was on Wednesday summoned for the second time in three days by the Enforcement Directorate (ED) for questioning in the case of misappropriation of funds during his tenure as the President of the Jammu and Kashmir Cricket Association (JKCA).

Abdullah, who turned 84 on Wednesday, was questioned by the ED officials in Srinagar for more than seven hours on Monday.

The veteran politician and MP was summoned three days after he chaired a meeting of six J&K parties in Srinagar at his residence who signed the Gupkar Declaration on August 4 last year to "fight for Article 370". After the meeting, Abdullah announced the formation of the People's Alliance for Gupkar Declaration to fight for the restoration of Article 370. PDP president and former chief minister Mehbooba Mufti, J&K People Conference chief Sajad Lone and CPI(M) leader M.Y. Tarigami were among the leaders who attended the meeting at Adullah’s residence at Gupkar Road in Srinagar.

“We want the government of India to return to the people of the state the rights they had before August 5, 2019,’’ Farooq Abhdullah had said. “At the same time, the political issue of the state has to be resolved as quickly as possible through dialogue with all the stakeholders who are involved in the problem of Jammu and Kashmir.”

His son and the NC vice president, Omar Abdullah, and PDP chief Mehbooba Mufti had termed the summoning of Abdullah a political vendetta.“This is nothing less than political vendetta coming days after the formation of the People’s Alliance for Gupkar Declaration,’’ Omar had tweeted.

After leaving the ED office on Monday, Farooq had told reporters that his resolve to fight for the restoration of Article 370 will not change even if he is hanged.

Imran Nabi Dar, the NC spokesman, expressed anger over the ED summons to Abdullah for the second time in the three days. He termed the ED move as coercion aimed at curtailing Abdullah’s efforts to forge unity among the political parties of J&K.

“What did the ED forget to ask the 84-year-old politician during the six-hour interrogation earlier,’’ he asked. “The government and its agencies have no consideration for a law-abiding citizen whose immunity is compromised and  is diabetic.”

He asked how many times would the BJP use the ED, the CBI and the Anti-Corruption Bureau (ACB) to browbeat the opposition.

The case of misappropriation pertains to a payment of Rs 113.67 crore by the Board of Control for Cricket in India (BCCI) to the state cricket body from 2002 to 2011 for the promotion of the game. A significant amount of funds was allegedly misappropriated.

Abdullah was ousted as the JKCA president in February 2015 and replaced by Imran Ansari, who was then the sports minister in the PDP-BJP government. The CBI charge-sheet named Abdullah, Ehsan Mirza (then JKCA general secretary), Saleem Khan (treasurer) and Bashir Misgar (then J&K Bank Khanyar branch manager) as accused in the scam.