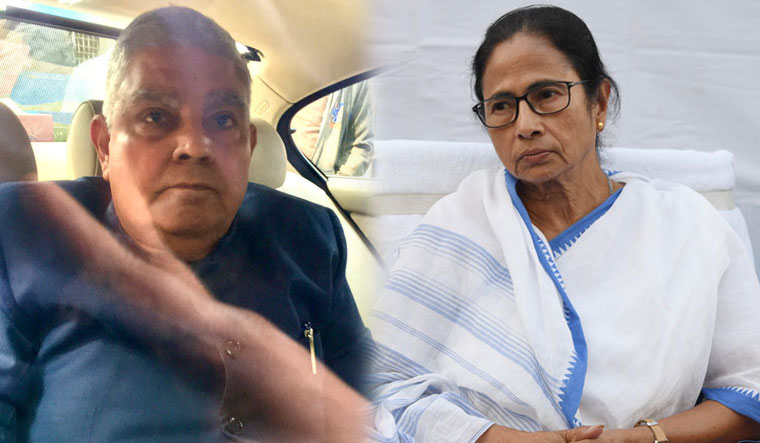 A day after Union Home Minister Amit Shah defended the BJP's demand for imposing presidential rule in West Bengal, Governor Jagdeep Dhankhar came down heavily on Chief Minister Mamata Banerjee over the death of BJP worker Kalipada Ghorai in police custody. In another letter to Banerjee, Dhankhar also mentioned Balwinder Singh, who was arrested by state police for allegedly carrying illegal arms in a BJP rally, as a “poster boy” for “blatant human rights violations in the state”.

On October 17, in an interview given to a private news channel, Amit Shah had said, “I totally feel the demand of the certain political section on imposing Article 356 in West Bengal is justified. But being in the government such imposition of president’s rule in any state requires procedure. The report of the governor of the state is one of them.”

Dhankhar wrote on Sunday, “While rampant human right violations, political violence, vendetta and custodial torture are on incremental trajectory, there is just no correctional recourse of any nature, including one under Sections 7 and 29 of the Police Act that provides for dismissal, penalty or suspension of erring and negligent police officers. This stance is an inescapable pointer that these gruesome violations are state patronised/sponsored. It is an open secret that politicised police has ‘finger in every pie’ of governance, a facet of police state.”

Governor had earlier listed names of errant senior police officers of West Bengal to the chief minister for departmental inquiry. The list includes the name of Inspector General (Law and Order) Ganwant Singh. The governor had also questioned the role of the retired IPS officer and former director general of police, Surajit Karpurakaystha, who is the special security adviser of Mamata Banerjee government.

“Disturbing that in spite of my repeatedly flagging issue of human right violations, political violence and vendetta, Supreme Court directives, qua custodial violence and breach of human rights, continue to be flouted by police and administration, another instance of governance being police driven with political motivation, both aspects being antithetical to rule of law,” said governor in his letter.

Quoting Supreme Court rulings against custodial killings, the governor said it was disturbing that no action was against any errant officer for the custodial death of Gharai, a Midnapore resident.

“Unfortunately these are (Supreme Court orders) in breach in the State in spite of exchequer being heavily drained with engagement of retired IPS officials Surajit Kar Purkayastha as State Security Advisor and Rina Mitra, as Principal Advisor, Internal Security,” said he.

Dhankhar, a former senior Supreme Court advocate, said that it is a mockery of democracy and alleged that the incidents happened out of political vendetta to subserve ruling party interests. He also asked the chief minister to make police force “political neutral”. He also asked Banerjee to “sanitise” the power corridor. He called the SSA and principal adviser of internal security, Mitra, as super boss who are performing their extra constitutional duties.

“High time that you should ensure that SSA and Principal Advisor, Internal Security, do not boss over the statutorily structured police apparatus, thereby reducing the DGP and other police officials to abject subordination and to insignificance,” Dhankhar said.

Mitra was in the CBI for long and was special security officer of the Union home ministry. She was considered to be the director of CBI last year but finally lost out to Rishi Shukla. Following to that she joined West Bengal government as security adviser.

Dhankhar said he had tried hard to make IAS and IPS officers of the state fall in line but in vain.

“I have in my own way tried utmost to make politically ingratiated IAS and IPS officials to conform to conduct and be 'politically neutral'. Many are yet to appreciate the gravity of it thereby exposing themselves to prospects of being visited with exemplary consequences. Hope my sane advice is impactful on such members of these premier services,” said he.

The governor also reminded Banerjee that the moment he raised the degradation of law and order and pointed fingers at the inefficiency of the police force, instead of an inquiry, the chief minister defended them. Shortly after the killing of BJP leader in Barrackpore, Manish Shukla, an advocate, Dhankhar had called DGP Virendra and sought explanation.

“I find it expedient to also share my worry and concern at floating inputs of unleashing strategised dare-devilish intimidatory tactics to browbeat political opponents by implication in all kinds of false heinous cases to serve political ends. You may recall that political targeted killing of Manish Shukla took place after I had cautioned the DGP and you chose to rise in his defence, as you did in 2019 for Kolkata cop, albeit this time through a letter and not physical stance, as was then. I hope and wish all concerned will desist from such illegal culpable acts that taint and shame our democracy,” said Dhankar.

He also alleged that chief minister had done everything to make the Raj Bhavan dysfunctional.

“I would also signal that efforts to compromise working of Raj Bhavan and make Governor dysfunctional are ex facie blatant transgression of the Constitution and cannot be overlooked.”