Who is Dr Dwarkanath Kotnis, whose 110th birth anniversary was celebrated by China?

"An eternal bond between the people of China and India" 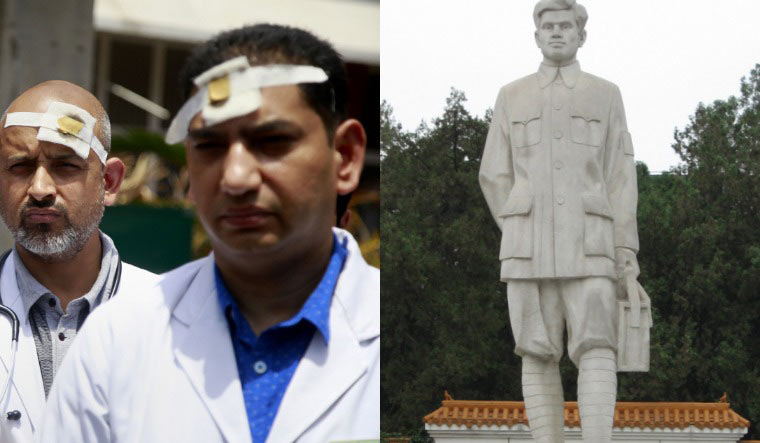 Statue of Dr Dwarkanath Kotnis in Hebei, China, on the right | Wikipedia Commons

China on Sunday commemorated the 110th birth anniversary of Indian doctor Dwarkanath Kotnis who served in the country during the Chinese revolution headed by Mao Zedong and the World War II. Kotnis' medical assistance during the difficult days was praised by Chinese leader Mao Zedong. His statues and memorials were set in some Chinese cities in recognition of his services.

On Sunday, the Chinese People's Association for Friendship with Foreign Countries (CPAFFC), an official body of the Chinese government, held an online commemorative event along with the director of the Centre for South Asian Studies of the Peking University.

Chairman Lin Songtian of CPAFFC said 2020 also marked the 70th anniversary of the establishment of diplomatic relations between China and India. "At a time when the world has undergone major changes unseen in a century and China-India relations are facing temporary difficulties, we solemnly hold the Kotnis commemorative event on the anniversary of Kotnis' birthday, which is of great significance," he said, apparently referring to the current border tensions between the two countries.

"Hope to cherish the memory of this good friend of the Chinese people and an outstanding internationalist fighter, and call on the Chinese and Indian people, especially the younger generations of the two countries, to further carry forward Kotnis' international humanitarian spirit, jointly maintain peace in Asia and promote world prosperity and development," he said.

He hailed from Sholapur in Maharashtra, and arrived at China in 1938 as part of a five-member team of doctors sent by the Indian National Congress to help the Chinese during the World War II. While his contemporaries returned, he remained in the country, joined the communist party and continued to tend to the wounded soldiers. He passed away in December 1942.

According to Chinese Communist Party (CCP) archives, Kotnis arrived in Yan'an in January 1939. He moved on to an anti-Japanese base area in North China, where he acted as the physician-in-charge of the surgical department of the Eighth Route Army General Hospital. He joined the communist party in July 1942, later taking on the post of the first president of the Bethune International Peace Hospital.

He married Guo Qinglan, a Chinese colleague who was reportedly impressedly with his ability to speak and even write their language. Their son was named Yinhua (India and China in Chinese characters).

According to the archives, in one long-drawn out battle against Japanese troops in 1940, Kotnis did operations for 72 hours non-stop, without any sleep. He treated more than 800 wounded soldiers during the battle. His life was immortalised in a biography One Who Did Not Come Back and a 1946 Bollywood movie Dr Kotnis Ki Amar Kahani.

A bronze statue of Kotnis, known in China as Ke Dihua, was formally unveiled at the medical school at Shijiazhuang. Apart from the school named after him as the Shijiazhuang Ke Dihua Medical Science Secondary Specialised School, there are memorials of Kotnis in both Shijiazhuang, the capital of Hebei province, and Tangxian county where he once worked.

According to Liu Wenzhu, an official of the Shijiazhuang Ke Dihua Medical Science Secondary Specialised School, since the founding of the school in 1992 more than 45,000 medical professionals have graduated from it. "Each of the new students and staff must swear in front of a stone statue of Kotnis that they would work like him," he said. Liu hopes that Kotnis will be remembered not only as a symbol inspiring medical students to work hard, but also an eternal bond between the people of China and India.