Tamil Nadu: Power struggle between EPS, OPS heats up in AIADMK ahead of CM candidate announcement

Who will take over the reins of the party? 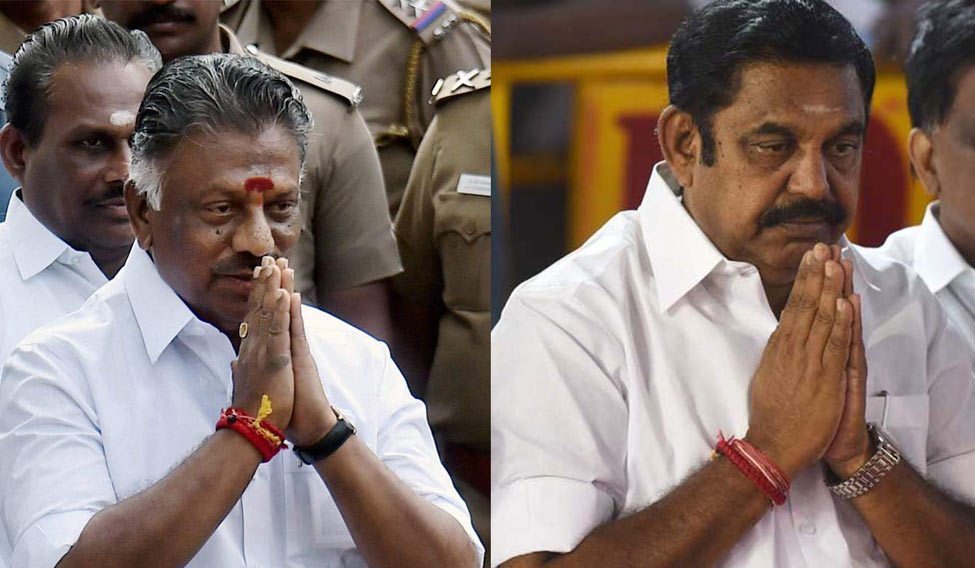 On Friday, Tamil Nadu Chief Minister Edappadi K. Palaniswami (EPS) and Deputy Chief Minister O. Panneerselvam (OPS), accompanied by their cabinet colleagues and party activists, paid homage to Mahatma Gandhi and former CM K. Kamaraj on the 151st birth anniversary and the 45th death anniversary of the two personalities. Clad in their usual crisp white shirts and dhotis, with a dash of ash and vermilion on their foreheads, the two were not willing to see eye to eye. One man sported a friendly smile, clubbed with a cheerful demeanour, while the other remained staid and expressionless.

An uneasy acquaintance was at its peak, and the discontent was apparent. Though termed as the “double barrel” gun of the AIADMK by their party leaders, political jousting between the two has been gaining pace over the past few days. "The fight is not for who will become the chief ministerial candidate. It is over who takes over the reins of the party. OPS has been asking for the constitution of an 11-member steering committee. Both EPS and OPS had agreed on this during the merger in August 2017. But EPS doesn’t want the panel to be constituted," a senior AIADMK leader close to OPS told THE WEEK.

Incidentally, on September 28, when the party’s executive council met, OPS and some of his supporters like J.C.D. Prabhakar and P.H. Manoj Pandian were vociferous against the chief minister and his team, demanding that the steering committee be constituted immediately. But, EPS opposed the idea; his supporters like Minister P. Thangamani, former MP M. Thambidurai and a few others said that a decision on the next chief minister candidate should be announced immediately. According to sources, some claimed EPS was popular like former CM Jayalalithaa, which makes him the ideal choice. But the debate spiralled out of control, and arguments hit fever pitch. Thus, it was decided that the chief ministerial candidate will be announced on October 7.

However, in the meeting, EPS had the backing of all the party seniors, giving him a distinct advantage. But, OPS, who has the backing of the ruling party in Delhi, is not in a mood to give up. After the merger in 2017, OPS’s stature in the party began diminishing, and he lost everything to EPS, relegating him to play second fiddle. Since 2019, the EPS dispensation has been clipping his wings. Take an example: In September 2019, according to a new notification from the state government, the Chennai Metropolitan Development Authority (CMDA) delegated powers to the greater Chennai corporation and local bodies around the city to approve planning permission for larger buildings. While the AIADMK leaders dismissed this as usual administrative activity, CMDA’s powers, the portfolio of which comes under OPS, was transferred to local bodies under S.P. Velumani. Incidentally, Velumani is often referred to as the “shadow CM” in the Coimbatore administrative circles.

While OPS is very much aware that the party has started rallying behind the chief minister, he has been successful in ensuring that the latter is not able to announce this openly in any party meeting. “He will ensure that no decision will be announced on October 7,” a source close to OPS family informed THE WEEK.