The most widespread protests were in Punjab and Haryana 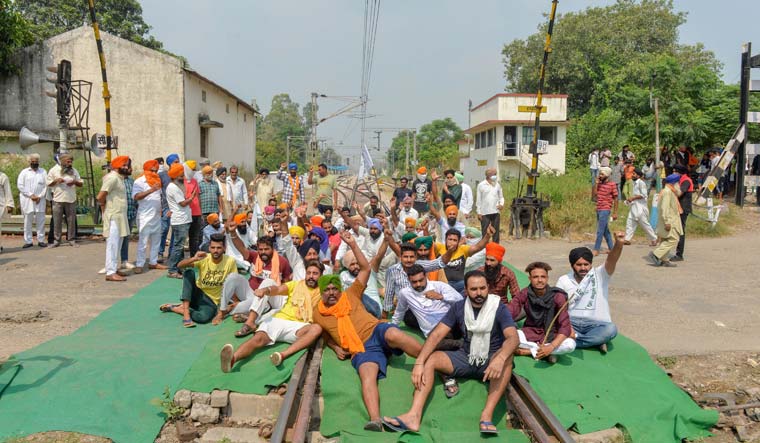 Members of various farmers' organisations block a railway track during a protest over farm bills, in Rupnagar district of Punjab | PTI

Farmers shouted slogans and blocked roads in several parts of the country Friday, protesting against the three agri-marketing bills passed recently by Parliament.

The most widespread protests were in Punjab and Haryana, but demonstrations were also reported from Uttar Pradesh, West Bengal, Kerala and Karnataka as part of the Bharat bandh call given by several farmer unions.

Over 30 organisations had given a separate Punjab bandh call, leading to farmers blocking roads and traders shutting shops and vegetable markets for the day. The bandh in the state appeared to be near total.

Hundreds of farmers -- on foot, two-wheelers and tractor-trolleys -- were stopped at Delhi's border with Uttar Pradesh as they tried to press ahead into the national capital, their agitation disrupting traffic in Noida and Ghaziabad.

Stopped from entering the city, the farmers staged 'panchayats' at the road blockades where they were addressed by Bhartiya Kisan Union office-bearers.

Addressing BJP leaders and workers on the birth anniversary of party's ideologue Deendayal Upadhyay, Prime Minister Narendra Modi again made a pitch for the new laws meant to deregulate the sale of farm produce.

But farmer unions and opposition parties say they will lead to the dismantling of the minimum support price (MSP) system.

CPI(M) farmers' wing 'Sara Bharat Krishak Sabha' and those of other left partners such as CPI, Forward Bloc and RSP took out rallies in Hooghly, Murshidabad, North 24 Parganas, Bankura and Nadia.

In Karnataka, there were demonstrations across the state and many farmers arrived in capital Bengaluru to take part in protests against amendments to the Agricultural Produce Marketing Committee Act and the Karnataka Land Reforms Act.

Farmers under the umbrella of the All India Kisan Sabha (AIKS) staged protests in Kerala, including outside the Raj Bhavan in capital Thiruvananthapuram.

In Punjab's Barnala, a tractor was set on fire by protesters.

Buses run by the state-owned Pepsu Road Transport also went off the roads in Punjab.

He led a tractor march from his Badal village to Lambi, where the party had organised a protest against the bills. At several other places, party workers blocked roads.

A three-day rail roko that began Thursday is also underway in Punjab, with farmers squatting on the tracks at many places in Punjab and the railways suspending many trains.

The Kisan Mazdoor Sangharsh Committee on Friday announced its extension by another three days. Buses run by state owned Pepsu Road Transport Corporation also remained off the roads on Friday.

Apart from Noida and Ghaziabad which border New Delhi, there were scattered farmer protests in western Uttar Pradesh and in districts like Deoria, Kushinagar and Maharajganj districts.

The Samajwadi Party said its workers held protests in all UP districts, submitting memorandums addressed to the Governor to the district magistrates.