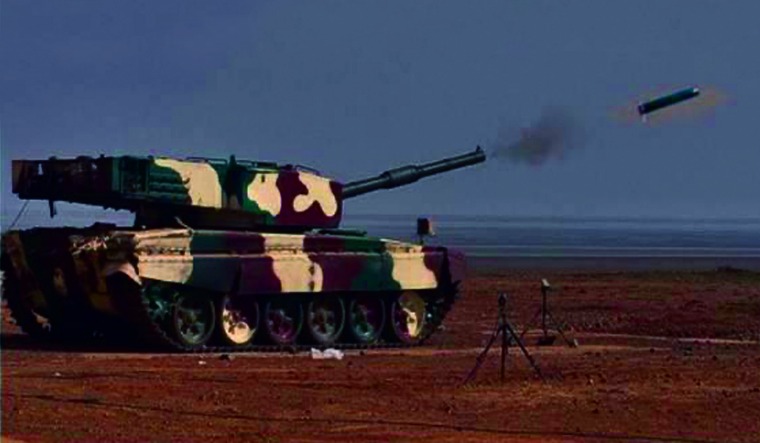 The missile being fired from a tank | PIB

The DRDO announced on Wednesday that it had successfully tested an indigenously developed laser-guided anti-tank missile from the Arjun main battle tank.

"The weapon, having a range of up to four km, was test-fired from an MBT Arjun Tank at KK Ranges in Armoured Corps Centre and School (ACC&S) in Ahmednagar on Tuesday. The laser-guided anti-tank guided missile (ATGM) is likely to significantly enhance the firepower capability of the Indian Army particularly along the frontiers with Pakistan and China," officials told PTI.

"The missile employs a tandem HEAT warhead to defeat explosive reactive armour-protected armoured vehicles. It has been developed with multiple-platform launch capability and is currently undergoing technical evaluation trials from gun of MBT Arjun," said an official. Defence Minister Rajnath Singh congratulated DRDO for the successful test, noting it was " assiduously working towards reducing import dependency in the near future".

In 2014, then DRDO chief Avinash Chander told Hindustan Times the organisation was dropping the LAHAT and was working on an indigenous solution. The Comptroller and Auditor General had criticised DRDO for procurement and testing of the LAHAT missiles at a cost of Rs 19.53 crore, on the grounds that the missile's manufacturer had stated it would not meet the minimum engagement range criteria.

A cannon-launched missile capability was one of the key upgrades sought by the Army for an upgraded Arjun variant called the Arjun Mk-1A. The DRDO has been anticipating an order for 118 Arjun Mk-1As for several months. The Arjun Mk-1As will have improved fire control, sighting system and transmission compared with the first-generation Arjun tanks.

In March this year, it was reported that the defence ministry had concluded negotiations with the Ordnance Factory Board for 118 Arjun Mk-1A tanks, with a tentative price of $888.7 million.

An official of the DRDO's Combat Vehicles Research and Development Establishment (CVRDE) told The Print in March that the indigenous cannon-launched missile would be integrated to the Arjun Mk-1A as the tanks "start rolling out" off the assembly line.