Adityanath declared he was blessed to have a leader, mentor and guide in Modi 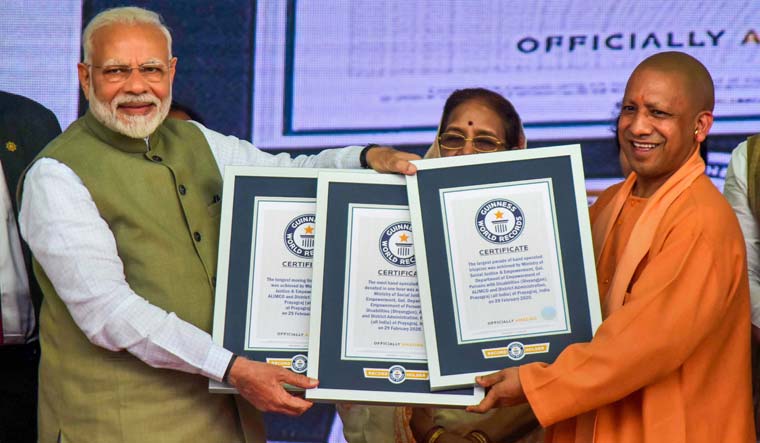 A host of politicians and leaders praised the leadership of Prime Minister Narendra Modi as they wished him on his 70th birthday.

President Ram Nath Kovind congratulated Modi on his birthday and tweeted Modi had presented "an ideal in showing commitment to India's life values and democratic traditions".

Adityanath wrote in The Indian Express "The sad story of India since Independence has been of a lacklustre leadership pushing the nation into anarchy, insecurity, social disharmony, crisis of faith and unavailability of the basics... the country failed to command respect from its peers."

Adityanath noted Modi had turned this situation around, and a "new India has emerged". He wrote, " In six years, our illustrious Prime Minister Narendra Modi has turned India into a nation to reckon with."

Adityanath highlighted Modi's focus on welfare schemes. He wrote, "The prime minister has united the poor, youth, farmers and women into a single unit and upheld the slogan of ‘Sabka Saath, Sabka Vishwas’. Be it Beti Padhao-Beti Bachao or the Ujjwala Yojana, welfare schemes have been created to benefit the last man in the line and to instil in women a sense of self-pride and self-reliance."

Adityanath also highlighted Modi's successes in foreign policy and security. Adityanath claimed, "The country had been facing security challenges for the past several decades. The prime minister has thwarted all those challenges and laid the foundation of a powerful Bharat."

Adityanath referred to the surgical strike of 2016 and the Balakot airstrike of 2019 and declared Pakistan "cannot even dare to look at us".

"At this point, superpower USA considers India as its strategic partner and Europe wants to establish economic and defence cooperation with us," Adityanath wrote in The Indian Express.

Adityanath declared he was blessed to have a "leader, mentor and guide in our beloved PM Modi, a person with unmitigated righteousness, unquestionable sense of service towards mankind and overwhelming sensitivity”.