Focus on child, not curriculum, when schools reopen: Pratham CEO

"Reassess their skills and strengthen their basics" 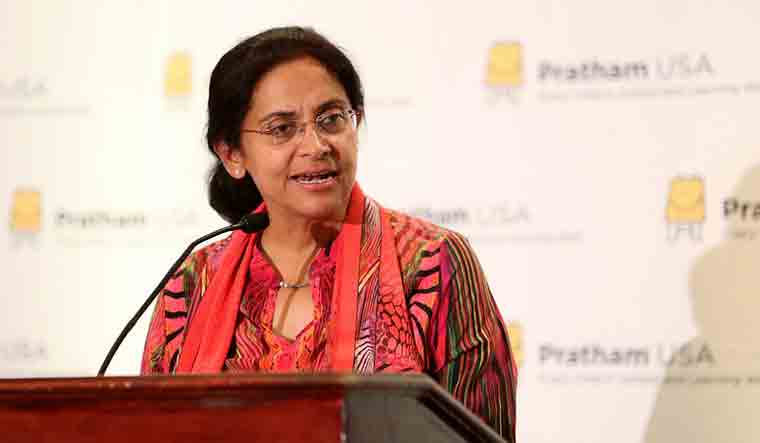 When the lockdown was imposed, schools shut down suddenly, leaving students and teachers unprepared for what the new reality would bring. Now, as people are already looking towards reopening on the other side of the pandemic, schools and teachers need to prepare for that eventuality.

While technical upgrades and health protocols are top in the list of reopening preparations, Rukmini Banerji, CEO of Pratham, the country's leading non-governmental organisation in bringing education to the underprivileged, has a word to caution. “Do not be in a rush to impose the curriculum on children and rush to meet examination deadlines,'' she tells schools and teachers.

“Children have been away from school for half a year already, they might be away for longer. Give then the time to reacquaint themselves, to catch up and focus on rebuilding their basics.''

In an interview with THE WEEK, Banerji said that the lockdown was sudden, giving no one the opportunity to plan. It took teachers and institutions the best of three months to get systems in place and begin online education, though a large swathe of children is totally out of the ambit of education, now. However, there is ample time and opportunity to prepare for the re-opening, she says.

Reopening should be treated like a celebration, feels Banerji. “Teachers must set aside the curriculum for a bit, and plan for a big catch-up for every child. Reassess their skills and strengthen their basics. The National Education Policy 2020 also focuses on strong basics,'' she says.

She points out that while schools, administrations and governments have worked hard at making interventions -- online classes, phone, television and radio-based classes -- these efforts have not been able to reach every child. The worst hit are the migrants, many of whom may have returned to their home states, and away from the schools they were in. The effort, therefore, should be to reach out to every child once schools reopen. ``It is not impossible. On record, at least 96 per cent of children in the 6-14 years age group are enrolled in school. Their attendance is another matter. However, the enrollment records should have addresses, and with the right effort, every such child can be reached.''

While several studies pose bleak figures about the millions of children who may have dropped out of education completely, Banerji is positive that these children can come back into the fold, the efforts, should however, be directed well. ``There was a study from Pakistan some years ago, looking at the recovery after a big earthquake. It showed that while other indices like health and economy returned to original levels soon, the level of learning among students remained low. This was not because schools closed down as much as it was about the rush back to the curriculum, which led to children dropping out.''

Banerji discussed these issues with a panel of experts from Asia on Wednesday, at an online conference titled: The View from the Ground: Putting in Place Solutions.