The social media post was only a catalyst for the pre-planned riot, the panel said 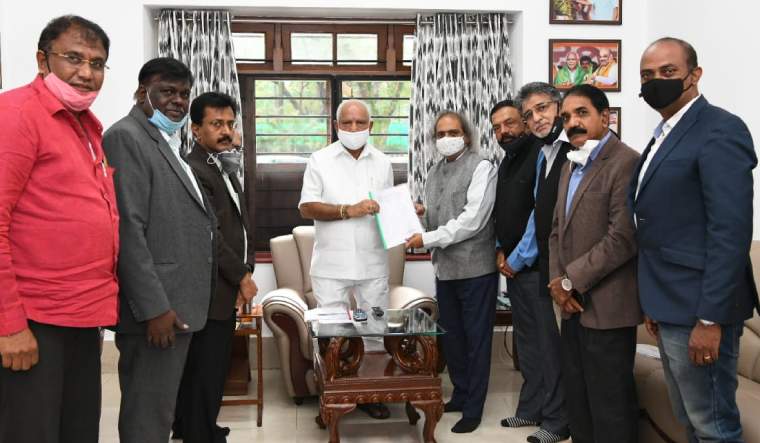 The Bengaluru violence on August 11 this year in DJ Halli and KG Halli hints at a “land jihad” similar to what Kashmir and Padarayanpura in Bengaluru witnessed in the 1980s and 1990s, when rioters forced Hindu families out of the locality to establish their dominance in the changed demography, observed the Fact Finding Committee of the Citizens for Democracy, a platform for citizens formed to uphold democratic values.

The committee, headed by retired district judge Srikanth D. Babaladi and comprising senior bureaucrats, advocates, social workers and journalists, submitted a report to Chief Minister B.S. Yediyurappa in Bengaluru on Friday, where it has stated the riots were pre-planned, organised and qualifies to be a “riot against the state”.

The panel members who visited the riot affected area, interacted with victims,  police and prominent people of the locality, examined the FIRs, evidence, media reports and footages, are of the opinion that the incident was “communally motivated” despite attempts being made to project the same as political rivalry.

“Such incidents attempt to shake the solidarity of Bengaluru citizens. The motive of the riots could be fear mongering so as to change the demography and turn the locality into a Muslim-majority area,” notes the panel, which alleges the involvement of SDPI and PFI members in planning and execution of the riots.

“The strategy was used in Padarayanapura during the 1980s and 1990s, where fear and coercion was used against Hindus compelling them to sell their homes at throw away prices and settle in a peaceful area. Riots cause the property values to spiral down, weaken the local economy and drive out Hindus. The houses of Hindus are then purchased by Muslims, which eventually changes the demography of the area,” observes the panel, which contends the primary intention of the rioters was to indulge in “land jihad” and spread their majoritarian status to the adjacent areas.

“The status of Kashmiri Pandits and Hindus of Padarayanapura must not be forgotten,” says the report.

Documenting the August 11 riots, the report mentions that a group of 15-20 Muslim youth had gathered outside Congress MLA from Pulakeshinagar R. Akhanda Srinivas Murthy’s house in Kaval Byrasandra to protest against the derogatory post put up by Naveen Kumar, nephew of the local MLA on social media. SDPI members Muzammil Pasha, Fairoz and others went to KG Halli police station to lodge a complaint against Naveen.

However, even after the police assured them that action would be taken, the crowds swelled to 3,000 within an hour and the houses of the MLA and his nephew, and both the police stations were attacked. Hindu homes were vandalised with rods, stones and machettes, and private and police vehicles were torched. It was pre-planned to compel the police to open tear gas shells and firing.

As per the report, the attack was pre-planned as only select houses of Hindus were attacked, while no property of the Muslim families were harmed. In his statement, the KG Halli SHO has stated that all the attacks were simultaneous and coordinated. The victims, whose houses were attacked, stated in unison that they were specifically targeted and that “Muslim houses were spared”. Interestingly, none of the Muslim families had parked their vehicles outside their homes in the usual parking space on the day of the incident, which implies that they had prior information about the riots. Prasanna, a resident, recalled strangers lurking in the locality days prior to the attacks.

The committee has indicated it is a communally motivated incident as the locals stated that the mobs were shouting slogans such as “Allah hu Akbar” and journalists assaulted by the mob, too, deposed that they heard slogans like “Islam Zindabad, Paigambar Zindabad”.

Even after the police filed a complaint against Naveen and assured action against him, the mob demanded that the MLA’s nephew be handed over to them. Naveen’s mother, too, recalled that the people who attacked their houses wanted them to surrender her son to them.

The tension between the two communities has been brewing since long, and Naveen’s post was only a catalyst, says the report by corroborating incidents in the run-up to the events. Naveen’s father had stated they were facing trouble since August 5, when his son organised celebrations to mark the foundation-laying for the Ram Mandir in Ayodhya.

During COVID-19 lockdown, Wajid, a SDPI member had put up posters stating the local MLA was “missing”. Again on August 9, Naveen had put up two more posts asking his friends to join him in celebrations if they were “truly secular”.

In the 72 FIRs filed in the case, 120 accused are from Bengaluru and perhaps from the two adjacent localities. Even the three deceased were locals and lived within a kilometre from the police station that was attacked by the mobs. While the families of the deceased—Yasin Pasha (21), Wajid Khan (21) and Sheikh Sidfiqui (24)—claim they were only bystanders and did not take part in the violence, the fact that police opened fire at the mob from inside the police station confirms the victims were among the rioters on the street very close to the police station.

The panel has recommended that the cost for damages caused to public and private properties be recovered by attaching the property of the rioters. The pattern of the riots is common with that of Delhi and Sweden and calls for a thorough probe rather than treat it as a local and isolated one, states the panel, insisting that the NIA should track the funding to individuals and religious extremist organisations indulging in anti-social activities.

The police should map communally sensitive areas and devise short-term and long-term strategies to tackle future events. A Cyber Dome must be established to prevent misuse of social media for hate mongering against any religion, race or class of people. With the abolition of Section 66A of Information Technology Act, 2000, a mechanism has to be evolved to prevent and prosecute derogatory, abusive and hate content targeting any religion, drug menace be curbed with iron fists and intelligence gathering must be strengthened.