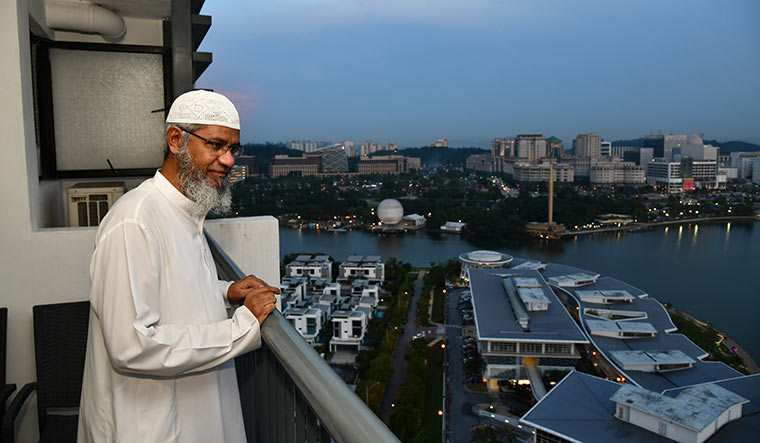 (File) Zakir Naik at his house in Putrajaya | Sanjay Ahlawat

Controversial Islamic preacher Zakir Naik continues to reach out to his followers in India and across the world on a near-daily basis despite leaving for Malaysia in 2016. Even though India has demanded his extradition on charges of money laundering and incitement to violence, Zakir Naik continues to propagate his teachings via frequent videos, which are disseminated via social media.

On Friday, Zakir Naik's official Facebook channel uploaded a video of him responding to a follower's question on how Indian Muslims should respond to the "harassment and oppression" of the BJP government in India.

Zakir Naik claimed, "In last four-to-six years, there is an onslaught on Muslim minorities in India. There are lot of lynchings, attacks..." and alleged there was lot of oppression and persecution under the current government.

Zakir Naik categorised his response into two: Muslims as a whole and as individuals. Naik said Indian Muslims as a whole “should be united," noting they are divided on basis of "different sects in Islam, and belonging to different political parties and social organisations".

Zakir Naik declared the different Muslim groups in India "are fighting each other, criticising each other..."

Zakir Naik claimed "Babasaheb Ambedkar loved Islam, but unfortunately the Muslims didn't welcome him, so he chose the second best... he chose Buddhism". Zakir Naik argued such a political alliance of Muslims and dalits would represent nearly 600 million people and be a major force.

Referring to Muslims as individuals, Naik claimed if Indian Muslims could not practice their faith, they should do Hijira (flight to avoid religious persecution).

"If you have the means to go to a Muslim-majority country, that should be the best," Zakir Naik said, adding he did "not expect" all Muslims of India to leave the country.

Zakir Naik said Muslims who could not move out of the country could go to another state, "which is more lenient towards Muslims". Naik added that the "best state I can think of" is Kerala. Zakir Naik claimed that followers of all three major religions—Hindus, Muslims and Christians—each accounted for about one-third of the population of Kerala.

"The people of Kerala are not communal in nature. The people of different religions live harmoniously. There is no friction between different religions,” Zakir Naik argued. He also added "this government (BJP) doesn't have much hold in the state of Kerala". “So, one of the best options if you want to do Hijira to another state, I would say, is Kerala," Zakir Naik said.

He said the "less communal states" include "Bombay where I come from or Hyderabad". He said Uttar Pradesh was very communal. Zakir Naik also endorsed ghettoization, noting Muslims could consider moving to parts of cities. He cited Dongri and Byculla in Mumbai as options, emphasising the high population of Muslims in these localities.