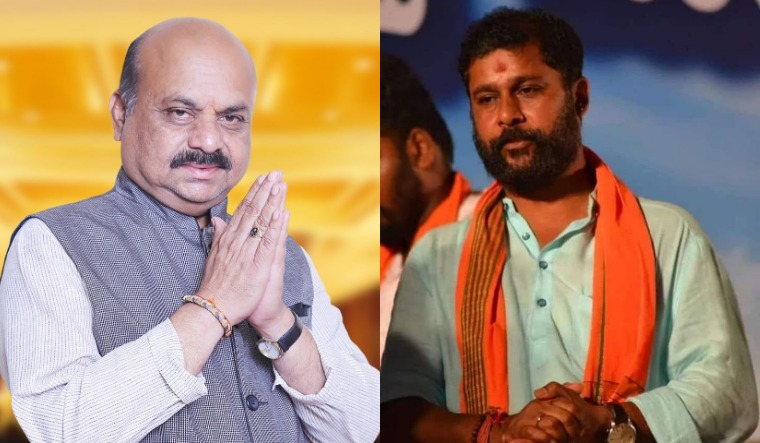 Karnataka Home Minister Basavaraj Bommai is in the dock after a video of him assuring some Hindutva activists of dropping all cases against them went viral.

In the video, Bommai is speaking to a group of people led by VHP leader Sharan Pumpwell, where he says, “Nodi, yaavde nimma mele case haakidroo, tegedu haaktheevi...(Look, we will drop any case booked against you).”

Bommai's statement has sparked a controversy as people are questioning the wisdom of the home minister in giving assurances that ‘belittle’ the legal system, as well as raise suspicion of the state extending undue favours to the Sangh Parivar activists. However, the man who was spoken to by the home minister in the video, Sharan Pumpwell, claims that the home minister said nothing wrong, as the activists had sought his help regarding the false cases being slapped on them.

Speaking to THE WEEK, Sharan Pumpwell demanded to know if the Hindutva activists had no right to seek remedy from the home minister when they are wronged.

“The state is treating Sangh Parivar activists as criminals by slapping CrPC 110 (dealing with habitual offenders) and abettors of crime (section 107—wilful misrepresentation or concealment of a material fact),” lamented the VHP leader.

"It does not matter who is ruling the state, as the Hindu activists continue to suffer due to false cases. Both the Congress and the BJP governments are the same. Our karyakartas are booked under IPC sections 110 and 107 during the festivities be it Janmashtami, Ganeshotsav or even Bakrid," complained Sharan Pumpwell.

"Are we terrorists or underworld dons? We work for our organisation and these cases have been booked for taking part in protests and for preventing illegal transport of cattle. One cannot equate us with criminals and anti-socials," he argued.

Recalling his meeting with the home minister, Pumpwell said, "On August 11, the home minister visited Udupi and he was supposed to visit Mangaluru the next day. But after violence broke out in Bengaluru, the minister went straight to the airport to take a flight back to Bengaluru. So, we rushed to the airport to meet him. We drew his attention to the fact that hundreds of karyakartas were suffering due to false cases. What is wrong in home minister's assurance? Perhaps, his choice of words created the controversy."

Calling out the "hypocrisy" of the political parties, Sharan Pumpwell said, "At least 500-600 Hindu activists in Mangaluru, Udupi and Puttur have cases against them. We are not criminals. The Siddaramaiah government had dropped 175 cases against 1,600 SDPI and PFI activists. But it was never criticised. In our case, we are only seeking respite from fake cases being used against us. Many persons have not been active in the organisation for more than a decade now. But their names are linked to each new case."