TN: Is O. Panneerselvam out of race to be AIADMK CM candidate? 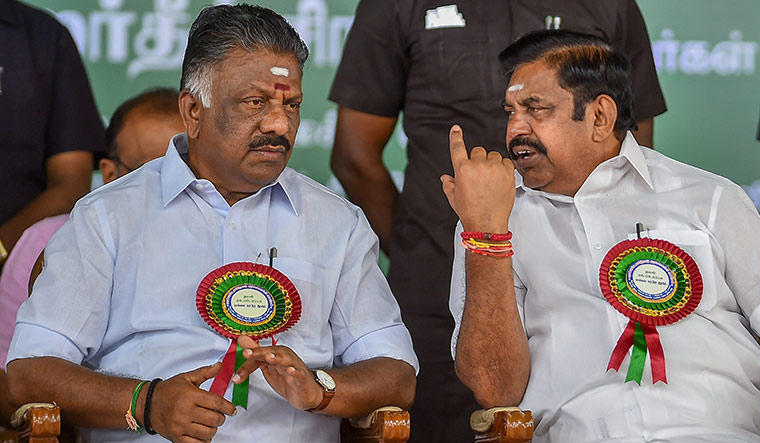 At a time when Tamil Nadu Chief Minister Edappadi K. Palaniswami has been toiling around the state, conducting review meetings to contain the spread of COVID-19, efforts are being made to prop up a strong leader to oppose DMK President M.K. Stalin. With elections around the corner, the ruling AIADMK seems to be clearing the hurdles within and outside the party for Palaniswami to be announced as the chief ministerial candidate.

On Tuesday, all of a sudden, Tamil Nadu Milk and Dairy Development Minister K.T. Rajenthira Balaji took to Twitter to say that Palaniswami is the chief ministerial candidate of the AIADMK and that the party should go into the elections by projecting Palaniswami. “Let us project Edappadi Palaniswami as our chief minister and meet on the field. We will set the target. Edappadi will be at the forefront. We will form a team and we will win. 2021 is ours,” he said in the tweet.

Incidentally on Monday, yet another minister from South Tamil Nadu, Sellur K. Raju, tweeted saying that the “MLAs will elect the chief minister after the elections”. The two tweets, both from ministers in Palaniswami cabinet, have triggered a row among the factions in the ruling AIADMK.

While O. Panneerselvam, the coordinator of the AIADMK and the Deputy Chief Minister, has not reacted on this, Palaniswami, in a rally, said that “people will decide the next chief minister,” when talking about the DMK projecting Stalin as its candidate. A senior minister told THE WEEK both Palaniswami and Panneerselvam “want each other to give up. This will not happen even before the elections”. He points out that declaring anyone other than Palaniswami as the chief ministerial candidate will only make it obvious that he did not perform well as the chief minister.

According to party insiders, the ministers’ tweets were orchestrated by the strategy team, which is working in tandem with the chief minister’s son and a former IPS officer, only to ensure that the field is cleared for Palaniswami.

“It is to ensure that there is no potential threat for Palaniswami, both from within the party in the form of Panneerselvam and outside the party in the name of Sasikala or her family members. OPS [Panneerselvam] might not react to this now, but his silence at this point of time raises questions. In case EPS [Palaniswami] is the chief minister candidate, the general council will have to meet and approve this and he also should sign as the coordinator of the party,” a former MP and a AIADMK senior member told THE WEEK. The former MP also clarified that efforts are being taken to ensure that Palaniswami takes over the reins of the party. For the first time in the history of the AIADMK, since its launch in 1972, it is witnessing a dual leadership. And this is in a state where the Dravidian parties have always projected their respective leaders as the chief ministerial candidate.

Incidentally, Panneerselvam’s silence raises several questions. His political future too depends on the outcome of the Assembly elections. If AIADMK comes back to power, Panneerselvam continuing as the deputy chief minister and coordinator of the party is inevitable. “This is DMK’s election. There is double anti-incumbency. If we lose, where will Panneerselvam be if he gives up the party post also?” asks the former MP.

The divisions will only widen the existing factional feud in the party close to the elections and also close to the days of Sasikala’s release from prison in Bengaluru. The AIADMK saw a major reshuffle within the organisation amid the pandemic. The number of party districts was increased to 67, thus accommodating 29 new district secretaries and 11 organisation secretaries. The party’s information technology wing was also divided zone wise and the zone leaders have been asked to strengthen the IT wing. And AIADMK is looking to strengthen its youth wing by increasing its membership. All the new appointments were made after Palaniswami and Panneerselvam had detailed discussions in July on the advice of the new strategy team.