Police refused to file FIR against the MLA's nephew, says the outfit 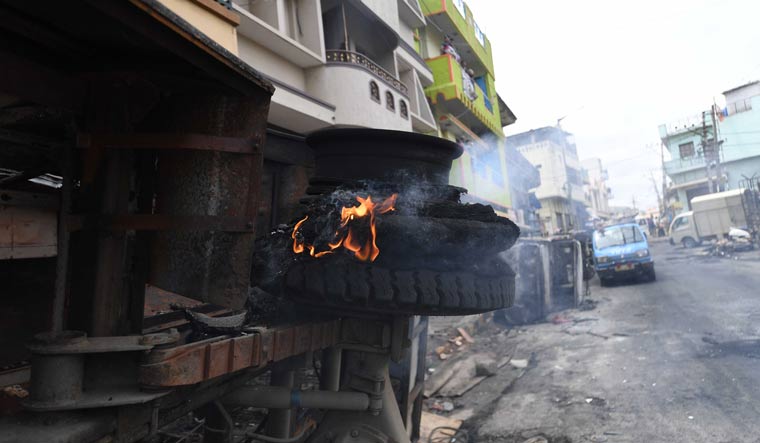 A “blasphemous” post on Prophet Muhammad on Facebook and the delay tactics of the Bengaluru police in registering an FIR against the person who shared the post are to blame for Tuesday night's violence, alleged the Social Democratic Party of India (SDPI) leaders on Wednesday.

"On August 11, around 5.30 pm, the community members came to KG Halli police station to lodge a complaint against MLA Akhanda Srinivas Murthy's nephew P. Naveen for his offensive post. But the police did nothing for three hours. The protestors demanding Naveen's arrest were growing restless. The police were aware of the consequences but chose to ignore the people. Till 9 pm, no FIR was lodged. Naveen has a history of sharing offensive posts but always went scot-free due to his political connection," alleged Abdul Hannan, general secretary of SDPI,  Karnataka.

The SDPI defended its member Muzammil Pasha who has been detained by the police in connection with the violence that rattled the city.

"It is wrong to say Muzammil was inciting violence. He was in the police station appealing to the community members to maintain peace. But the mobs went on a rampage and started attacking MLA's house. We don't justify the violence, but would like to place facts about what led to the violence," explained Hannan, who urged the state government to pay compensation to the families of the three persons killed in the police firing during the violence.

Earlier, SDPI state president Elyas Mohammad Tumbe said that it was a mob violence caused by the police negligence.

"The police were reluctant to arrest Naveen, which lead to the violence. The arrest of our member Muzammil is only a diversionary tactic of the police, which failed to act in time. The police which wasted no time in arresting our members for unsavoury posts on social media, did not bother to arrest Naveen," said Tumbe, adding that his party would stand by the truth and demanded action against the "blasphemous act".

Interestingly, the Congress party, too, blamed the police for its "failure" to act against Naveen.

"Naveen is a staunch supporter of the BJP.  The police which filed a suo motu case against a Congress party worker for his derogatory post on the Union home minister recently did not bother to file an FIR against Naveen for hours nor to arrest him. Instead they made the complainants wait for hours. This led to the disaster," said KPCC chief D.K. Shivakumar.

"We believe the violence was a pre-planned conspiracy. Our panel comprising K.J. George, Ramalinga Reddy, B.K.Hariprasad, Krishna Byre Gowda and Naseer Ahmed will probe into the incident further," said Shivakumar.

Revenue minister R. Ashoka also claimed the violence was part of a larger conspiracy. "It was a big conspiracy to eliminate the local MLA, Akhanda Srinivas Murthy. A thorough probe will reveal the facts."

The state government has ordered a magisterial probe into the incident.