Perpetrators will be dealt with an iron hand, says Ashoka 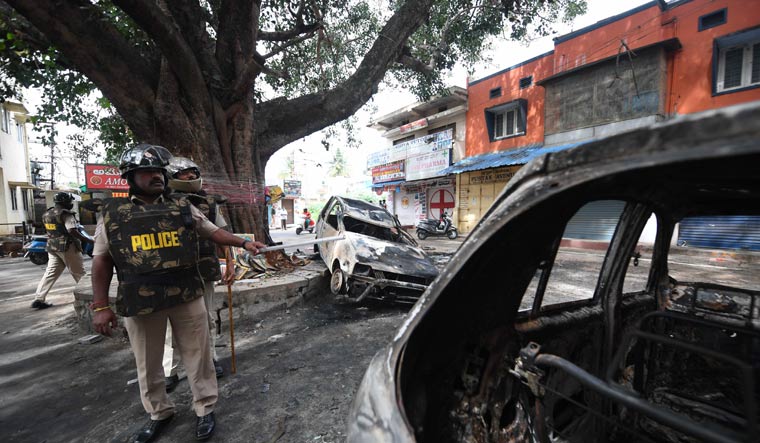 Karnataka Revenue Minister R. Ashoka said on Wednesday that the violence that broke out in Bengaluru on Tuesday night was a “well planned act”, adding that the perpetrators would be dealt with an iron hand.

"The manner in which the riots were perpetrated shows that it was a well planned act and was intended to spread to other parts of the city,” he said.

Three people were killed in the police firing and scores other injured, including 50 policemen, in the violence that erupted on Tuesday night at DJ Halli in Pulakeshinagar locality over an alleged Facebook post on a 'communally sensitive' issue by a relative of Congress MLA Akhanda Srinivasa Murthy.

The Pulakeshinagar MLA's house was vandalised by a huge mob on Tuesday night.

After visiting Murthy at Vidhana Soudha on Wednesday, Ashoka said: "It is clear from the intensity of vandalism that the intention was to attack and finish off Srinivasa Murthy.”

Terming the attackers as “traitors”, Ashoka said the government will send across a strong message so that no one would ever dare to take law into their hands again.

"Whether Popular Front or SDPI is behind it, we will not bother. These people must be arrested. We will hunt them wherever they are holed up," Ashoka said.

Meanwhile, Murthy, who faced the wrath of a violent mob, said that those who perpetuated the violence are not from his constituency, but outsiders. "It will be good if I get security," he told ANI.

Karnataka Chief Minister B.S. Yediyurappa had termed the violence "condemnable" and said he ordered "strict action against the miscreants and the government has taken adequate measures to bring the situation under control."