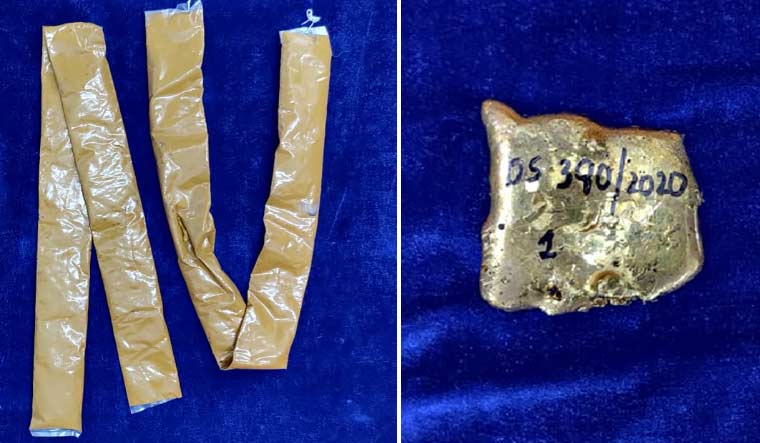 The two, Kasimani Kolanji, 22 and Murugan Chandran,38 from Thanjavur in Tamil Nadu had arrived from Dubai via an Air India Express flight and were intercepted by Customs Air Intelligence unit officers on suspicion of carrying gold, a press release by the office of the commissioner of customs said on Wednesday.

After they were searched, four polythene pouches(two each) containing gold paste were found concealed inside the waistline/belt portion of their jeans. On extraction by heat treatment, 731 grams of gold of 24K purity—valued at Rs. 34.5 lakhs—were recovered and seized under Customs Act 1962.

Smuggling gold via paste form is a new way that helps smuggled dodge metal detectors, with numerous reports of this practice emerging since 2018. The gold paste can look very unlike gold in photographs, but gold can be extracted from it later using a chemical process.

Further investigation is under progress.

On Tuesday, officials said they seized over Rs 80 lakh of gold in separate incidents over two days, PTI reported. One passenger was found smuggling over Rs 15.60 lakh of gold concealed in his inner garment, while Rs 66.73 lakh of gold in paste form was reported seized from two passengers arriving on repatriation flights on Monday.

The two passengers who had concealed the precious metal were arrested, the release said.

Officials said the repatriation flights are operated to bring back stranded Indians from various destinations to the State. Despite travelling in such flights, the passengers indulged in such acts for earning a meagre sum, they said.

Till August 3, as many as 49,336 passengers have arrived from various overseas destinations to Tamil Nadu since May as relief flights are being operated to bring back stranded Indians following the COVID-19 enforced lockdown.