DC, however, says woman’s husband set her on fire to obstruct govt work 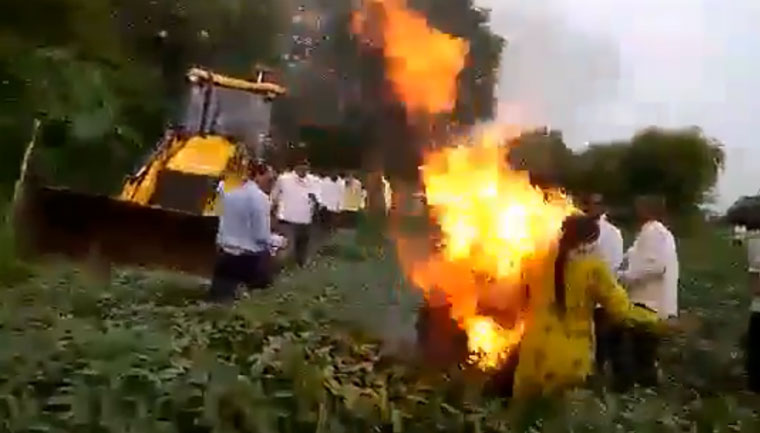 A video showing a woman allegedly trying to self-immolate in a bid to save her crops from an anti-encroachment drive in Madhya Pradesh's Dewas district has raised a political storm.

The Congress Opposition in the state took up the incident, which bears similarities to the suicide bid earlier this month of a farmer couple in Guna district in response to an anti-encroachment drive on the farm, to attack the Shivraj Chouhan government in the state and demand justice for the woman and her family.

The video of the incident, showing the burning woman dashing away, has gone viral on social media.

Ex-chief minister Kamal Nath also posted the video on Twitter to attack Chouhan, saying that ‘’a sister was forced to self-immolate in the rule of someone who likes to get himself called a mama (maternal uncle)”.

Nath, while saying that the woman had tried to self-immolate to protest the destruction of standing crops in her field, has demanded an in-depth probe into the matter, strict action against culprits, proper treatment for the woman and help for the family.

Several other Congress leaders including ex-MP Congress Committee chief Arun Yadav also took up the issue on their social media accounts, demanding justice for the woman.

The Dewas district collector Chandramauli Shukla has, however, said that the incident, which occurred in Atwas village in the Satwas Nagar panchayat area of Dewas district on Tuesday, did not pertain to an anti-encroachment drive—alleging that the husband of the woman has tried to set her on fire in a bid to obstruct government work related to paving a way between the agriculture fields.

Shukla, while talking to THE WEEK, said that the matter was related to a dispute regarding paving of a way amidst the agriculture fields between two cousins, Ramzan Khan and Mehmood Khan. He said that the dispute was being heard in the court of the local tehsildar and that on Tuesday the two brothers had come to a mutual agreement to get the way paved partly in both persons’ fields.

“The administrative team escorted by police reached the village along with the cousins to get the way paved. But at the last moment, Ramzan apparently had a change of mind and he brought out his wife into the fields and set her dupatta afire, all in the presence of the members of two families and the government team. The Patwari who rushed to save the woman was also assaulted along with other members of the team by Ramzan’s family,” the collector said.

Shukla added that the woman has been rushed to hospital in Indore, where her condition is stable as she has only partial burns, mainly on her hands. He added that police had registered cases against Ramzan and eight others for trying to obstruct government work and under other pertinent sections of IPC.

“There is a bid to give a different colour to the incident, when it emerged from a family dispute and it was the government team that was attacked,” the collector said.

Earlier on July 14, a farmer couple in Guna district had attempted suicide by drinking pesticide after the district administration tried to get the land, which was apparently illegally leased to the couple by a local land mafia, vacated. Crops were standing on the land and the couple had resisted the bid to run a hoe machine on it. However, the police brutally thrashed the couple, leading them to attempt to take their own lives.

The incident, a video of which also became viral on social media, had attracted nationwide criticism of the state BJP government. Later, the district collector, superintendent of police and even the Inspector General of the Gwalior range were transferred out by the government.