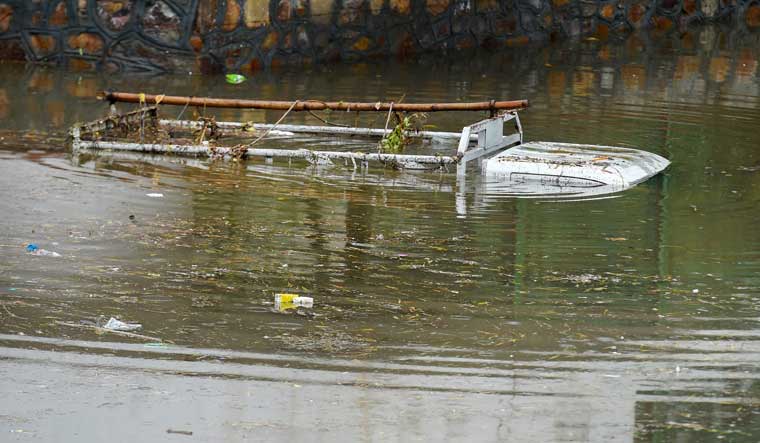 New Delhi: A submerged tempo at the waterlogged Minto Bridge underpass, following incessant rains in New Delhi, Sunday, July 19, 2020. The driver of the tempo is believed to have died due to drowning | PTI

A 56-year-old man, driving a mini-truck, drowned after he was stuck under the waterlogged Minto Bridge in central Delhi on Sunday following the first heavy monsoon showers in the national capital.

As the shocking incident led to questions being raised on the preparedness of authorities to deal with the waterlogging problem during the monsoon, the Aam Aadmi Party accepted there have been some delays in the cleaning of drains due to the COVID-19 pandemic and said it was not a time to indulge in a blame-game.

Police suspected that the man, identified as Kundan Kumar, died due to drowning since no external injury marks were found on his body, an official said.

He was the sole bread earner of his family including his elderly parents, wife and two daughters, aged 22 years and 11 years, who live in their native place in Pithoragarh in Uttarakhand, said his cousin Pritam Singh.

Kumar was driving a Tata Ace from the New Delhi Railway Station to Connaught Place when he got stuck in the waterlogged area.

He was trying to manoeuvre his vehicle through the waterlogged underpass but failed and allegedly died due to drowning, said a senior police officer.

Later, a video emerged which showed that Kumar's body was fished out by a group of people.

A DTC bus and two auto-rickshaws were also stuck at the Minto Bridge underpass due to waterlogging, following which three people were rescued, Delhi Fire Service officials said.

Waterlogging at the concave railway underpass at Minto Bridge during the rainy season is a recurring issue.

As the pictures of the incidents were shared on social media, many pointed out that instances of vehicles getting stuck and people being rescued have been reported in the past as well, and questioned why the problem has not been addressed permanently.

Chief Minister Arvind Kejriwal later tweeted that the water had been drained from the area. He and other AAP leaders also stressed that both the Delhi government and the BJP-ruled MCDs need to work together to get the necessary work completed.

Kumar was last seen perched on the top of his submerged Tata Ace by a boy known to him, said his cousin.

"A boy who knew him saw him sitting on the roof the vehicle. When he returned with help my brother was not seen. Maybe he got scared and could not escape or may be he slipped. Later, his body was retrieved from the water," Singh said.

Police said that Kumar was unconscious when he spotted floating by some people who then rushed him to a hospital where he was declared brought dead.

He used to drive the vehicle, owned by his cousin Pritam, to transport goods, police said, adding that inquest proceedings have been initiated in the case. Kumar lived in Shankar Market area

His body has been shifted to a mortuary at Ram Manohar Lohia Hospital wherein it will be handed over to his family after a post-mortem, police said.

An official in the Delhi PWD, which is the road-owning agency, said that the apparent cause of waterlogging seems to be a blockage in the main sewer line on the Deen Dayal Upadhyaya (DDU) Marg, which is under the DJB.

"It seems that water came out of the main hose and came out on the roads, which ultimately stagnated under the bridge, as it's a low-lying area. A detailed enquiry report will be prepared soon," the official said.

The BJP claimed that the incident has exposed the AAP government.

In a statement, AAP spokesperson and DJB Vice-Chairperson Raghav Chadha said that it was unfortunate that a person lost his life due to heavy showers and water-logging.

"But I do not want to name any particular agency or to play politics about this matter. I just want to again request all the agencies to work together," Chadha said.

"Every year before the monsoon around March and April, the Delhi government executes the desilting of the drains. The municipal corporations of Delhi also execute the same for the drains which are under their jurisdiction," he said.

"But due to COVID pandemic this year, this work could not happen effectively. However, after the lockdown, the work started and both the Delhi government and BJP ruled and MCDs have started the work of desilting of the drains," he added.

Chadha said that it is unfortunate that at a time when all agencies are busy in working to combat the COVID-19 pandemic, "the BJP is blaming us for the water-logging incidents".

"The Aam Aadmi Party government does not believe in such a blame game at a time of crisis and that is why we are accepting that due to COVID, there have been some delays in the cleaning of drains and we believe that both the Delhi government and the MCDs will work together to get the necessary work completed," he said.

The national capital received its first spell of heavy rains on Sunday morning which led to waterlogging in low-lying areas and brought traffic to a standstill at key stretches in the city.

A call regarding the stranded vehicles at the Minto Bridge underpass was received around 7.54 am. A team from the Delhi Fire Service was rushed to the spot for rescue work, Atul Garg, Director, Delhi Fire Service, said.

"A DTC bus and two autos were trapped due to waterlogging. The driver and conductor of the bus and an auto driver were safely rescued by our personnel. There was no passenger in the bus," he said.

The fire service personnel used a ladder to bridge the gap from the footpath and the low floor bus, which was submerged in the heavily waterlogged underpass, to rescue the stranded.